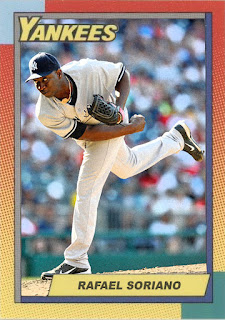 Sorry about that. I took a few days off due to no apparent things to write about. But, to quote Eddie Vedder, I'm still alive.

(What, were you expecting something hip, like the Black Keys?)

But anyway, I must report on the loss of another Yankee, this one our 2012 closer, Rafael Soriano. You know, it's one of those things where you hate a player up until the point he signs for your team. I hated Rafael on the Braves, and I hated him on the Rays. And then they sign him as the Next Mariano Rivera (which sounds like it should be hosted by Ryan Seacrest. I know. Two for two on outdated references), and I sorta begin to not hate him. I thought he was good during the 2011 and 2012 seasons. Maybe I was biased, but there ya go.

So today, Rafael signs with the Nationals. This I'm fine with. The Nats are a good team, one that's building a stronger foundation to go farther in the postseason. Soriano could add to the already-strong bullpen they have over there.

The problem that leaves the Yanks is who takes over after Rivera leaves. Yeah, David Robertson's an option, but an option that hasn't been well tested. Last season he was injured most of the time. I don't know if he's too reliable. But again, we'll see how the season goes for Rivera now.
Posted by Jordan at 3:52 PM