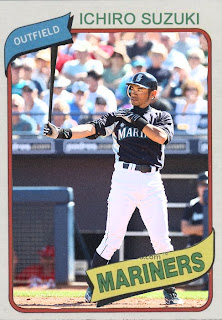 My Gosh, if this guy doesn't end up in the Hall of Fame first ballot, it will be for one sole reason: his team has never made, let alone won, a World Series. For the past twelve seasons, the Mariners have started off kinda strong, then sank into mediocrity. Hell, I actually thought they'd get to the World Series back in 2001, then I remembered- THEY WERE PLAYING THE YANKEES.

Ichiro, hands down, is the greatest Japanese player ever to play the game. No one else comes a yardstick's worth close. He had a numerous amount of 200 hit seasons, until last season. And it's likely that, since his career is on the downslope, he may not ever make a World Series. But will that stop his entry into Cooperstown? No. He ruled the Major Leagues for a brief period of time, and he's still one of the biggest stars. Hell, at a Baltimore game I attended vs. Seattle, the free prize was an Ichiro customized ball. He was so huge that the attendees of the OTHER TEAM were giving out balls with his face on it.

But still, I hope Ichiro's 2012 season is an upgrade from last year. And I hope no loss of rings can keep him from Enshrinement.

Coming Tomorrow- One never knows.
Posted by Jordan at 8:51 PM