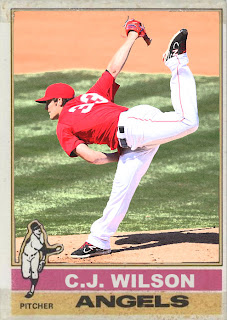 To be honest, about a year ago today if you told me CJ Wilson would be one of the bigger pitching stars in the AL, I'd shrug. I really didn't know who Wilson was last year, before the season started. When his Rangers started going nuts at the plate, he got the acclaim. Hell, at the end of last year he was dominating everything, which is why seeing him blow another World Series was a bit saddening. But of course, him and Pujols are now Angels, and will both be part of one of the most surprising AL teams this year.

Coming Tomorrow- Meanwhile, a tad upwards in California, a once retired star hopes to reclaim his mojo. So basically, if he fails, he's the baseball equivalent of Brett Favre.
Posted by Jordan at 5:18 PM
Labels: Angels, CJ Wilson, Custom Cards