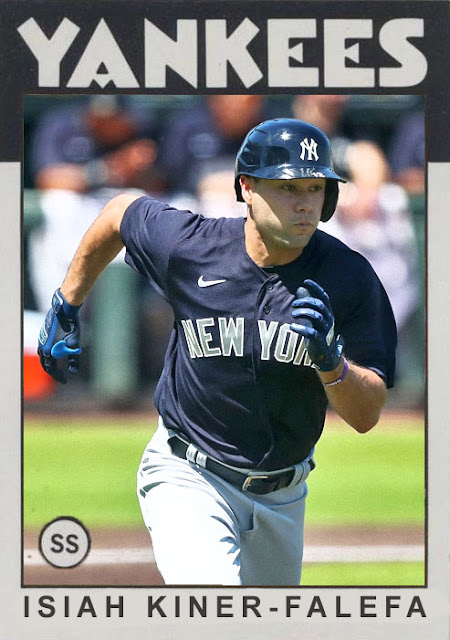 It's almost psychological in a sense.

Like, you can look into external factors into why people act a certain way. Oh, they did this for too long as a child, and because of that they do this habitually. Oh, because this happened when they were 4 they have anxiety when they try and do this other thing.

Perhaps all of these strange, impulsive moves are happening because the 98 day lockout completely removed the buffering period of 'is this a good idea?', and smushed the entire rest of an offseason into two weeks. Perhaps all of that time spent doing nothing has made this one of the most curious offseasons of recent memory, and could lead to one of the most fascinating seasons in a while.

Like, take it from this angle- going into this season, we already know that Ronald Acuna Jr., Fernando Tatis Jr., Chris Sale, Jack Flaherty, Lance McCullers, Stephen Strasburg and, knowing my luck, Sixto Sanchez, will be missing a large portion of the season. We're going in KNOWING that we're gonna be without a lot of this star power. We also know that a lot of people who've been considered team heroes for the past decade or so, like Freddie Freeman, Kenley Jansen, Matt Carpenter, Corey Seager, Matt Chapman and Carlos Correa will all be suiting up for different teams. So...2022 is going to look very strange, and very interesting.

For instance. My first custom of the year is of Isiah Kiner-Falefa. Twin for a day, Yankee for a lifetime. I think Jaime Garcia did something similar a few years ago. Isiah Kiner-Falefa was not the kind of Yankee by trade I was expecting this year. When the Twins traded Mitch Garver for him last week, I thought 'well there goes the Mitch Garver deal I thought Cashman would be handling'. You know, upgrade a catcher, let Jeffers start in Minneapolis. But Cashman had a better idea, which was making sure we didn't get Garver OR Sanchez this season. I'm still a bit boggled from that one.

But Isiah Kiner-Falefa is a strong piece in an infield that at any point could feature any one of Anthony Rizzo, D.J. LeMahieu, Gleyber Torres, Josh Donaldson, Miguel Andujar, Philip Evans, Ronald Guzman, or even Anthony Volpe if things really go south. Voit's gone, Urshela's gone, and those were some of the pieces that were actually working. And yet the Yankees have bolstered things, and are looking to be a surprise smash, in a division that also features the well-oiled machine in Tampa, contract-a-palooza in Toronto and the probable 1st place Boston Red Sox. Why do I see this team coming in fourth somehow? Why do I see this team blowing a series to the Orioles on the shoulders of Keegan Akin and a farmhand no one's heard of?

It's more curious still looking out at the teams that were counted out last season and are still aiming to compete. The Twins have Carlos Correa now, they're after Chicago's head. The Cubs got Seiya Suzuki and Marcus Stroman, they wanna cut off the Cardinals for the wild card spot. In my opinion, the single most underestimated team right now is the Kansas City Royals. Remember how they came out of Spring Training like a bat out of hell last year, and only slowed down once some of their larger pieces lost steam? The Royals made no real pawning-off moves, kept their core intact, and only got a few supplementary pieces, like Amir Garrett and Zack Greinke. If no one's looking, the Royals could make a run.

Clearly, though, the big dogs going into the season will be the overlords. The Dodgers made the biggest move of the offseason in signing Freddie Freeman, they want another World Series, and while supposed heirs apparent San Diego didn't do ANYTHING this offseason to try and stop them, the Giants are making the right moves to have to cut them off. The AL East is obviously not a done deal for the Yankees this year. The Mets may have done their usual overspending and getting huge pieces to supplement their core, but the Braves, Phillies, and even Marlins aren't going to allow them to waltz all the way to September with them. And while the Rangers were the most interesting buyers of the season, it's yet to be seen whether or not the rubber will actually hit the road with these contracts, or if the West will go to someone sensible like the Astros or Angels, or even someone trying their damndest like the Mariners.

There are so many wild, interesting storylines heading into this season. The absolute worst case scenario would be another obvious ending, like another Dodgers-Astros or Dodgers-Rays World Series. The kind of promising news is that with the 12-team playoff schematic, there's less of a chance of that happening, and more of a chance for someone to squeeze in. Yes, that someone who squeezes in could be the Astros again, but we need to see if they're a first place team or not this year first.

I hope it stays interesting the whole way through, and that it never bores me. May this be a compliment and not a death sentence.