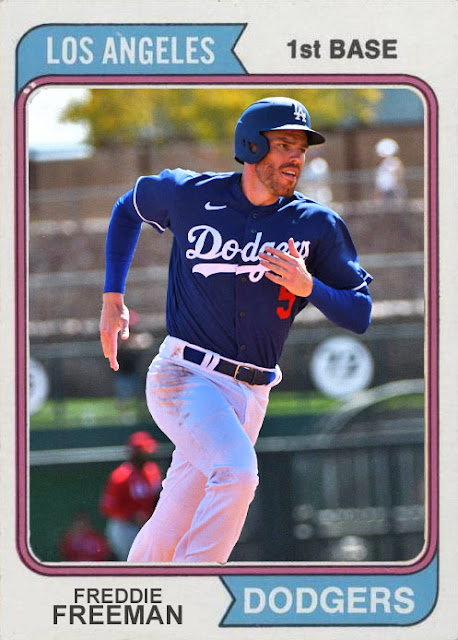 So. The top piece in the pool fell to Los Angeles. The Dodgers, with Freddie Freeman, now have four MVPs suiting up for them, along with Mookie Betts, Clayton Kershaw and I suppose Cody Bellinger. They would have had five if they had re-signed Albert Pujols before the impending St. Louis reunion.

But now this is our reality. The Padres and Giants competing, the Rockies getting some contracts, the D-Backs not selling....annnnd the Dodgers just got Freddie Freeman and ensured their infield's gonna be incredible. Freeman-Muncy-Turner-Turner? I mean, come on. Say what you will about Muncy's defense, but the amount of power and contact energy coming from that foursome, not even beginning to mention Mookie Betts, Will Smith or Chris Taylor, is gonna be extremely hard for any defense to tackle.

At the same time...Freddie Freeman became the hero he became thanks in part to being a small-market hero that remained in Atlanta during several purges, and stayed long enough to help win a World Series. We've had a few similar types of those in the last few years, with Ryan Zimmerman in 2019, and honestly Kershaw in 2020. The difference is that the Braves had to suffer through years of being non-competitive, dealing away Craig Kimbrel the day the season began in 2015, piecemeal rosters and tanking for draft picks before becoming a playoff threat again in the late 2010s. The Nationals were competitive all the way through 2019, and the Dodgers haven't not been competitive since Kershaw joined the team.

So what happens when the longtime small-market hero...moves to a competitor for a paycheck? Is he the same hero?

And honestly, this would have been the same if Freeman had gone to the Bronx, or Arlington, or any of the other non-Atlanta places he was rumored to have been looking at. The genuine, aw-shucks hero quality he had in Atlanta isn't carrying over to LA, where everyone's a star, and he's just another hero in a team of many. This arguably happened to Mookie Betts a few years ago, going from the young contact hitter who could to another scary figure in a unit. And now it's happened to Freddie Freeman. I honestly think it's a heel turn, too.

With Freddie Freeman, the Dodgers are even more of an alpha in the NL West, and that means the stakes are even higher for them. There can't be any moments of sputtering underneath the top two like last year. A team this big has to achieve exactly what it's supposed to, or else all that money will have been for nothing. This is why I'm intrigued to see how the Giants, Rockies and Padres fare against them this year, and who eventually takes first. The Dodgers may have made a huge statement going into the season, but it's all talk until the games start meaning something.

Tomorrow, we talk about, ironically, a former Dodger looking to settle his own murky division.