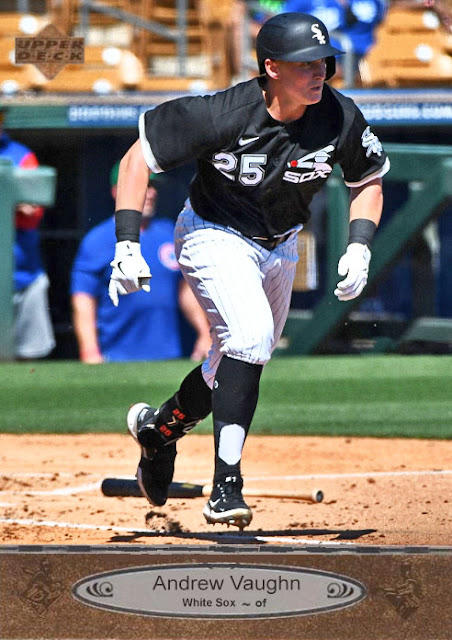 Last year, we had six division leaders. And now, here we are, heading into a playoff schematic where the division leader has less of a probability of actually making it to a World Series. So...what are we even looking at here?

I'm gonna analyze the 3 AL teams that won divisions last year, and go over how probable a repeat is. Let's start with the White Sox, because I have an Andrew Vaughn custom here.

White Sox: What has been prone to happen with this White Sox team is that they'll be in great shape during the season, go on absolute tears, look intimidating as hell, and then once the playoffs start get absolutely nothing done. The goal, I assume...is to not have that happen this year. But we are going into year two of the LaRussa-rest of the team dissonance, with so much youth and promise being hampered by an old-school thinker. Remember, this team had the last piece in place, with Yermin Mercedes, and LaRussa essentially 'this is the way things are'd him off the team. So now they have to try again. This year they're counting on people like Gavin Sheets and Jake Burger in larger roles, have Andrew Vaughn as a starting outfielder again, and have upgrades like Josh Harrison and Kendall Graveman locked in. Their only big loss was Carlos Rodon, and they have enough going on in the rotation to supplant that.

Here's the thing I'm worried about- last year, the White Sox was the sole horse in the AL Central race. This year the Twins look to compete, the Tigers have a stronger base, and the Royals could be a sleeper favorite. Now that the White Sox' 1st place finish isn't guaranteed, do they have as compelling a story. All of the big pieces are still there, but are they all going the right direction? I feel like they have the best shot to take 1st this year, but they really need to stick the landing. I'm worried that this could fall apart right at the end for the Sox.

Rays: Okay, so...all four teams that were competitive in the AL East last year still aim to be competitive. Two out of four of them did major work to retool the roster. Three out of four did...moderate to major work to retool the roster. And then there's the Rays, the team that won the division last year, and tend to usually do so. The Tampa Bay Rays are practically going with the same roster as last year, with only Corey Kluber acting as a new face. This gives you a couple truths about the Rays- they are confident with the young, not-quite-starry load of players they do have, they don't need a lot of spending to truly improve things, and they think the smaller approach will still lead to wins.

What is also telling about this team is what they were willing to offload. Several big pieces of these recent Rays teams, like Joey Wendle and Mike Brosseau, are now on other rosters. The Rays were also trying to flip players like Austin Meadows and Kevin Kiermaier this offseason. So while they're still competitive, they also know the low-budget approach works for them, and they are still confident in how Kevin Cash runs the team. However, we now have at least three major starting options, Tyler Glasnow, Yonny Chirinos and Shane Baz, who will be missing substantial time this year due to injury. Yes, there's still plenty of young options available to start games, but going up against known names like Jose Berrios, Kevin Gausman, Gerrit Cole, John Means and Nate Eovaldi this year, it's going to take a lot for them to be the last starter in the game. Especially considering how these competitors are packing their rosters.

I can't with certainty say the Rays are guaranteed to finish with a playoff ticket. But if the team's confidence pays off, maybe they could make it to another World Series.

Astros: On paper, logic dictates that the Astros should have no trouble this year. Their perennial rival for the division, the Oakland Athletics, just pawned off most of the team, and the other three teams have a history of squandering playoff hopes. But...like with the Rays, it's important to note how little the Astros have changed from last year. There aren't a lot of truly new faces to this team, or really any that feel like they'll be perennial members of this squad. The biggest contract signing the Astros made was re-upping Justin Verlander. And, most notably, the team let Carlos Correa get away in free agency. Of all the AL West teams, the Astros made the least amount of moves. Like the Rays, this move speaks to confidence. Unlike the Rays, the Astros may not all be on the same page.

In the past few years, we've seen a decent youth movement come up and repopulate this Astros team, led by people like Kyle Tucker, Yordan Alvarez, Framber Valdez and now Jake Meyers and Jose Siri. Meanwhile, this team still has retained Jose Altuve, Alex Bregman, Michael Brantley, Ryan Pressly, Yuli Gurriel and, yes, Verlander, all symbols of the old guard of this team. Can both exist simultaneously? Moreover, will the youth movement fully let this team move on from the 2017 sign-stealing debacle? Because it's certainly trying to. It's also important to note that staff ace Lance McCullers will be missing some time due to injury, so this team will need at least one strong, consistent rotation presence, and none of these people, even Valdez and Luis Garcia, have proved they can provide that. It may be down to Verlander, and when everything's coming down to a 17 year veteran who hasn't pitched in 2 seasons, it's not a good look.

Simultaneously, the Angels are looking refreshed and aim to compete, the Mariners made a ton of moves to ensure their competitive 2021 isn't a fluke, and the Rangers took on a ton of contracts to turn things around themselves. Even with the A's out of the picture, the Astros may not waltz to the end, and I have a feeling they'll have serious trouble doing so. They may still make the playoffs, because we're all apparently owed a bit more suffering, but I don't think the division will be theirs this year.

I'll do the NL teams in a few posts. That's a lot of dissecting for one day.