Topps Cards That Should Have Been: 2008 Mark Prior 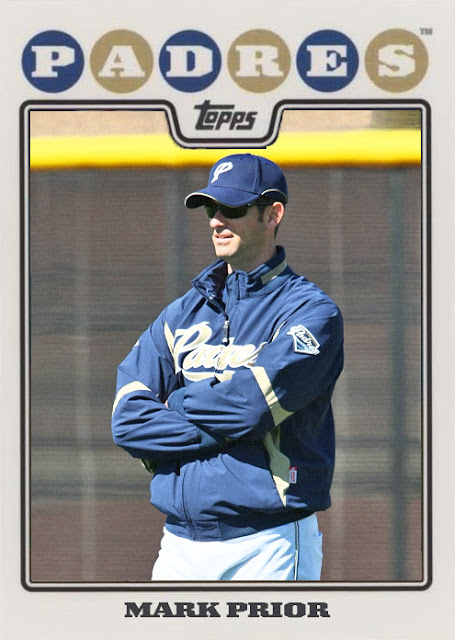 Spring Training is finally underway, and it's the time where we get to see players working out and trying to make spots on teams, brushing off fears of injuries or age. Anyone can be a hero in Spring Training. And it's fun to see people like Robinson Chirinos, Kirby Yates, Ender Inciarte and James Paxton all trying to make it on odd teams.

It brings me to the memory of another case of this from 2008, of a guy who at one point was one of the best pitchers in baseball. Former Cubs hero Mark Prior.

From 2002 until 2005, Mark Prior had a combined 16.6 WAR, including a huge season in 2003, with 256 Ks and a 7.4 WAR, helping his Cubs contend for a World Series [and thanks again to Steve Bartman for foiling that]. Like most true hurlers in this era, or any, Prior was felled by injuries, and by 2006 he was too injured to really succeed in Chicago, leading to an entirely dark 2007 season, and the Cubs releasing him.

The Padres, however, took a chance on Prior after recovering from more arm surgeries, and signed him to a minor league deal for the 2008 season. Upper Deck even produced a card of him, posed, as a Padre, but Topps did not. Prior looked to be a shaky but interesting bet for the Padres, already working with Jake Peavy and Greg Maddux in their rotation that year. Ultimately, the same issues that befell Prior in Chicago struck here as well, and Prior didn't make the team, or the majors again.

There's a lot of great articles out there about Prior's multiple comebacks with Pawtucket and Louisville, and how he never truly gave up even after losing the majority of his promise. I won't try to step on their toes.

This is the sort of spring training stint I think about a lot. Maybe there's a chance. Maybe not. Still good to give it a shot, warm up, see if there's anything worthy. I hope a lot of these guys in the same position Prior was in back in '08 are able to make things work this year.

Posted by Jordan at 1:24 PM
Labels: 2008, Mark Prior, Padres, Topps Cards That Should Have Been