Custom Card of the Day-Rookie Friday 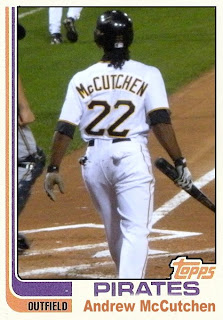 I've decided that every friday I'll be 'shopping a card of a rookie. This week, I did Andrew McCutchen mainly because he was the first one to come to mind...and I can't do David Price. This was a fun card to make, and I had a great time making it. Future Rookies I'll be covering will be Tommy Hanson, Francisco Cervelli, Koji Uhera and more.

Also, I was in Philly last night- no, not for the Phillies game. For the first College Football Game of the year down here- the Mayor's Cup. My dad went to Temple, which ultimately spells out which team we had to root for. That said, I wish he had gone somewhere else, because Villanova somehow crushed us even though we were leading at the middle of the 3rd Quarter. That says something about this team. I'll be getting dragged to another game at the end of the month...which just so happens to be the day before the Philly Show.

I would have been better off going to the Phillies game, because it ultimately said a lot about Pedro Martinez. The fact that a 37 year old fireballer could still win in a battle against the top pitcher in the league just floors me. Pedro's still got it. We're looking at a possible HOFer right here, if things keep going well.

I might not get around to posting tomorrow, as I have to get up earlier for something, but stranger things have happened.
Posted by Jordan at 11:41 AM
Labels: Andrew McCutchen, Custom Cards, Pedro Martinez, Pirates