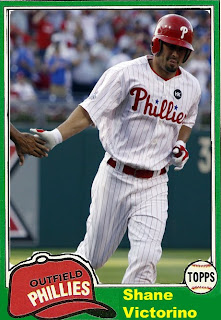 I love this guy. One of my favorite players on the Phils. He's just a great overall player and I don't root for him just because of the Phillies. Needless to say, this was a pretty easy one. I cut out Garry Maddox and laid in Mr. Hawaii over here, and boom- what a card!

Also- A-Rod hit his 2,500th hit. Yeah, at this point, I have completely forgiven him for the steroid allegations at the beginning of the year. That was a long time ago. Now, he's hitting wonderfully for us. Plus, his cousin did it, and he was a bit reluctant. So he has regained my trust. Now bash Bonds' record and we have something to talk about, Rodriguez.

Last night, the Phillies were playing the Giants, and we got completely pounded by Brad "Why was I a Red Soc?" Penny. After being thrown out of Boston's view, Penny threw us into oblivion and we lost. UUUUGGGGHHHHHHH! Why does this keep happening to us? Sure we were on a roll last night with Cole Hamels, but now we get the crap shaken right out of us! What did we do- Oh, right.

Will be doing a lot of photoshopping later this evening, and more Custom Cards are on the way.
Posted by Jordan at 10:07 AM
Labels: Custom Cards, Phillies, Shane Victorino