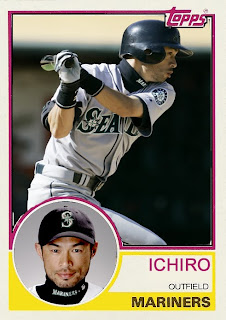 You knew that I'd had to put up an Ichiro. He's one of the best known players in the game right now. And coincedenatally, he just hit his 2000th hit yesterday. That takes skill. Either way, we're looking at a possible HOFer here, and the first to hail from Japan. The 83 design is one of my faves, and it looks even better when Ichiro's on it. This was another fun one to make.
Another trend these days- One hitters. Yesterday, Chris Carpenter of the Cardinals only allowed one run against the Brewers, with the only hit coming from Jody Gerut. JODY GERUT? Not even the world's largest vegetarian could get a hit? But Carp still did a great job, and this is going to be one tough offseason if ESPN is calling the series against these guys.
Also, in my region, school starts today, which is why I'm posting a little bit earlier. Let's just say I'm younger than the rest of you collectors and still have to go to this thing (But, hey. Forgivable, right? No one's unsuscribing if they know that these cards are coming from a teen). Don't worry, I still have time for you, my loyal reader. I will be making more custom cards later today, and a 999 post will be the headliner tomorrow.
Posted by Jordan at 7:07 AM
Labels: Chris Carpenter, Custom Cards, Ichiro, Mariners