A PSA Against Driving An ATV Instead of Running Bases, by Greg Olson 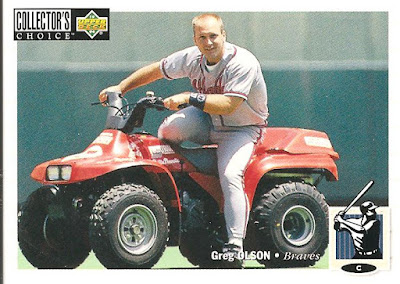 Now, way back in the day I used to be backup catcher for the Atlanta Braves. Great job, best years of my life, wouldn't have traded it for the world. However, one day I got too cocky, kids. I took a risk, and wound up making a fool of myself. And I'm here, wounds mended, to tell you about it.

You see, back in the 90's I was a quadder. Loved my ATV. Drove it in the winter, in the summer, at spring training. Anywhere I could, really. Aside from being a catcher, I loved ATVing. It was as much of a passion for me as catching fastballs from Greg Maddux.

So one day, I'm driving my ATV around the field before warmups, and I get an idea. You see, I was never the best base-runner. I was slower than a tortoise on quaaludes, kids. And that's why I didn't get the starting gig, because Javy Lopez could run a little faster than me, you know, pre-steroids.

So I thought 'what if I show Javy, and just take my ATV and instead of running the bases, I drive across in record time. Nobody'll say anything. Hell, nobody'll even notice. It'll go fine.

However, kids, ol' Uncle Greg made a very massive oversights in that plan. For instance, he forgot how easy it is for an umpire to notice a medium-sized ATV rolling toward second base.

But what really did me in...Chipper was up, and I was on first. I had the ATV ready to go and everything. I was just waiting for the hit. Sure enough, Chip hits it right toward Mickey Morandini at second. And I'm running toward Mickey. He's headed for the base, and so am I. So I hit the gas hard.

I hit him head on, kids. Mickey Morandini damn near concussed thanks to my ATVing.

They had to cart him off the field and bring in some backup. Meanwhile, Bobby Cox comes over to me and goes 'what in the Sam Hill d'you think you're doing? Driving an ATV on a damned baseball team. You should be ashamed of yourself, Greg. Ya really should.'

I'm just paraphrasing there, I think.

Long story short, Bobby threw me out of the game, and the umps put in a ban that ended up shortening my MLB career a bit. I was disgraced, and ashamed.

And that's why I'm talking to you kids. Also, because they took away my ATV, and I need the money so I can get another one. But mostly the first thing. Yeah...talking to kids. Teachin' em not to ride ATVs on the bases, because you might seriously injure a decent second baseman.

Now, scooters on the other hand...yeah, do whatever you want...
Posted by Jordan at 9:43 AM