1992 Studio: Behind the Scenes

(The Following Scenes most likely took place during the photo shoots for 1992 Donruss Studio. Below, are the transcripts of events that may have gone down in the studio with Rick Sutcliffe, Roberto Kelly, Norm Charlton, Mitch Williams and Rex Hudler. A lot of our tape has been lost, and these five are the ones that are completely undamaged. Now, the transcripts, and the cards that came from these sessions.

PHOTOGRAPHER: Good to see you, Rick. Nice to see you out of a Cubs uniform.

PHOTOGRAPHER: Just have a seat against that screen there. We're gonna try a couple of poses here today, so I hope that's alright.

SUTCLIFFE: It's fine. [after a beat] Is this product supposed to be, like, a fancier kind of thing?

SUTCLIFFE [Blunt]: Because there are basically just glamour shots we're doing here. I wanted to make sure you knew-

PHOTOGRAPHER: Oh, no, it's retail, but it's a classier design. Emphasis on posed studio shots.

PHOTOGRAPHER: I actually wanted to try something with emotion. Like, the same fury you have on the mound, channel that into this.

SUTCLIFFE: If you wanted that, then why didn't you just get a shot of me on the mound? That's what Topps has been doing for year.

PHOTOGRAPHER: Well...let's just try it this way. Just, turned to your right, completely. I'll count to three, and on TWO, you turn your head towards the camera.

SUTCLIFFE [Not getting it, but without any choice]: Alright, fine.

[Brief silence as Sutcliffe gets into position]

PHOTOGRAPHER: Again, embodying that fury, full of rage...1...you just gave up the winning run of the World Series...TWO, three.

SUTCLIFFE: The hell was that for?

SUTCLIFFE: You're asking for fury, so why do you want, like, a heartbreaking kind of thing?

PHOTOGRAPHER: Oh, you're right, my mistake. Okay, going for take 2. Again, fury, staring down the batter,...ONE, looking like you just caught me at a party with your wife...TWO, three. 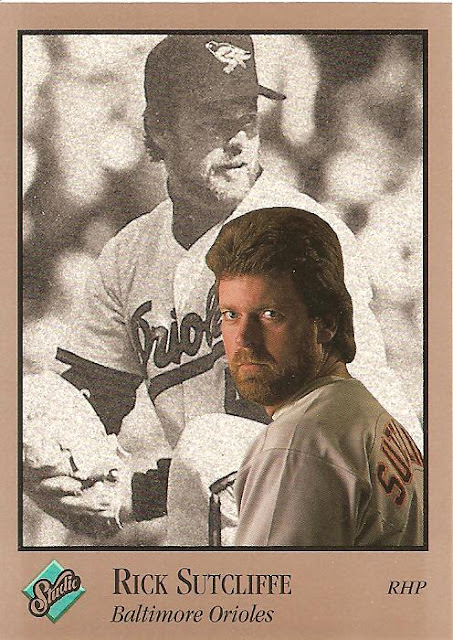 PHOTOGRAPHER: Good to see you Bobby.

KELLY: Good to be here.

PHOTOGRAPHER: Just sit down there, facing me entirely.

KELLY: Okay. Anything you want me to do?

PHOTOGRAPHER: Actually, you know what? Forget the stool. Get the stool out of the shot entirely.

[Kelly, not really knowing what to do, takes the stool and puts it off to the side.]

PHOTOGRAPHER: It'd be REALLY GREAT if you could crouch down, like SQUAT down, and put your right elbow on your leg there. And look up at the camera.

[Kelly gets into a squat position]

PHOTOGRAPHER: Just, really great. Keep that elbow down, this is a very pensive shot. I'll give you a countdown when we're ready to shoot.

[About 30 seconds go by. Kelly is still holding the squat]

KELLY: You are gonna take this shot, right?

PHOTOGRAPHER: Yeah, yeah. I just need to get my equipment set up.

KELLY: Dude...you have a camera...and a light...and nothing else. You really need that long to set up?

PHOTOGRAPHER: I had to change lenses.

KELLY: I SAW NO CHANGING. 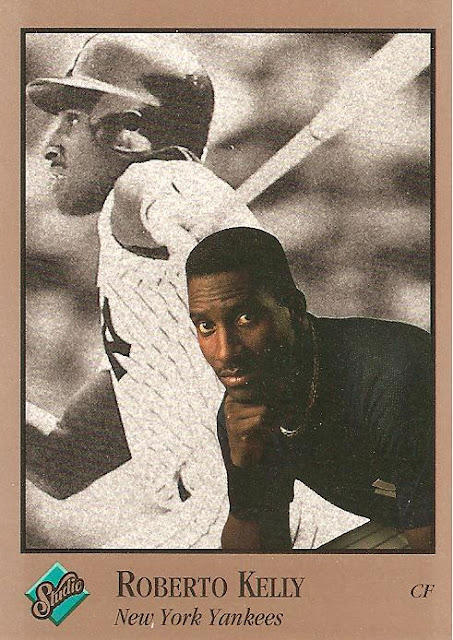 PHOTOGRAPHER: Good to see ya, Norm, Congrats on the Closer job.

CHARLTON: Thanks, man. Feels really good to have job security after all these years. So, what are we doing? Want me throwing a 4-seamer? Throwing down a bird?

PHOTOGRAPHER: So, if you can, take that ball, and cradle that ball like it's the most important thing in your life.

PHOTOGRAPHER: YES I KNOW IT'S A- [sigh] Okay, maybe I'll give this to you another way. Just, take that glove, and that ball, and cross your arms.

CHARLTON: Okay, I can do that.

PHOTOGRAPHER: Face a bit toward your left, head toward me...and give me your most intense, dominating expression.

CHARLTON: Alright, I'm in. Tell me when. 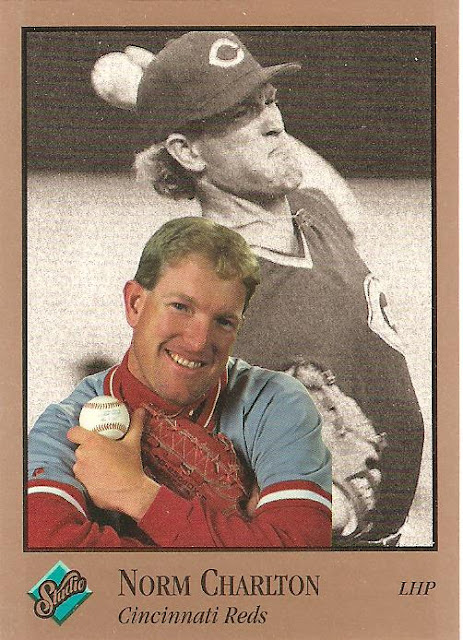 PHOTOGRAPHER: Good to s- what happened?

WILLIAMS: What do you mean, what happened?

PHOTOGRAPHER: You've...uh...got a bandage around your head.

PHOTOGRAPHER [not arguing with that]:...okay. Let's go for just an intimidating shot.

WILLIAMS: I don't wanna do intimidating. I can give you intimidating any other day. Let's have some fun. Jesus, who d'you think I am, Norm Charlton?

PHOTOGRAPHER: Look, Mitch, we can definitely do a less intimidating one. I still wanna set you up though.

WILLIAMS: Okay, then go right ahead.

PHOTOGRAPHER: Just have your torso face the right side of the room, head facing me.

WILLIAMS: That's easy. Now, what I'm gonna do, is I'm gonna pose like a model.

PHOTOGRAPHER: Actually, Mitch, I was thinking-

PHOTOGRAPHER: I just think it'd be a little cooler if-

WILLIAMS: TAKE A RISK, JIMBO. GIVE THE DONRUSS PEOPLE WHAT THEY'VE BEEN CLAMORING FOR, MAN. 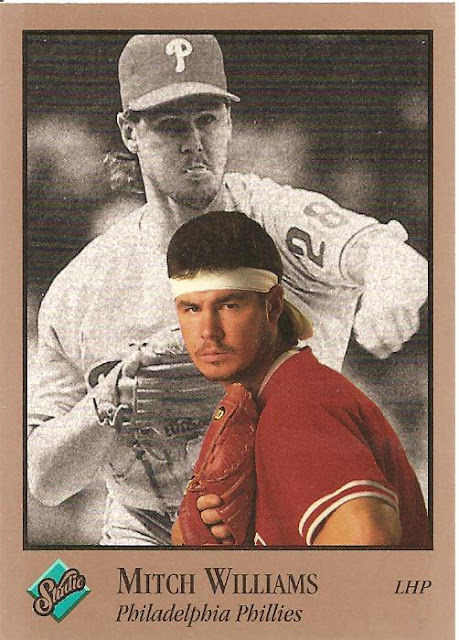 PHOTOGRAPHER: Rex, we've been here for an hour. I've been very clear on what I'm looking for. Just some emotion.

REX: Yeah, I've been doing that-

PHOTOGRAPHER: Yes, but the Donruss people's idea of emotion isn't just vacantly staring at the camera, and just lifting up a glove like it's a magic lamp. Just general emotion. Like...FEAR, or RAGE...

REX: I can give that a shot.

PHOTOGRAPHER: Okay, just sit toward me. And give me rage. Sheer rage. Like the Ump cheated you out of a safe play. One, two, three...

REX: That was rage. I was angry.

PHOTOGRAPHER: Rex, you winked at me.

REX: It was an angry wink. The wink of rage, man. Don't you read Hemingway? He does a lot of that.

PHOTOGRAPHER [exhausted]: Okay, fine, Rex, you win. We're gonna do one more. Just face the camera. Look at me. Do whatever the hell you want. I don't care what face you make. Just...do some form of emotion.

REX: I can try that. 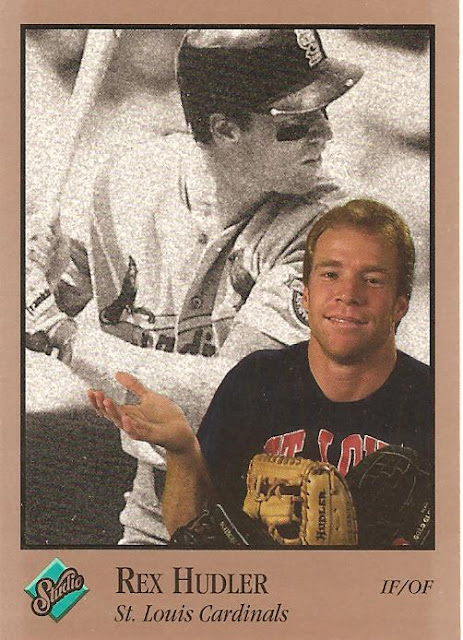