Nothing Goldy Can Stay 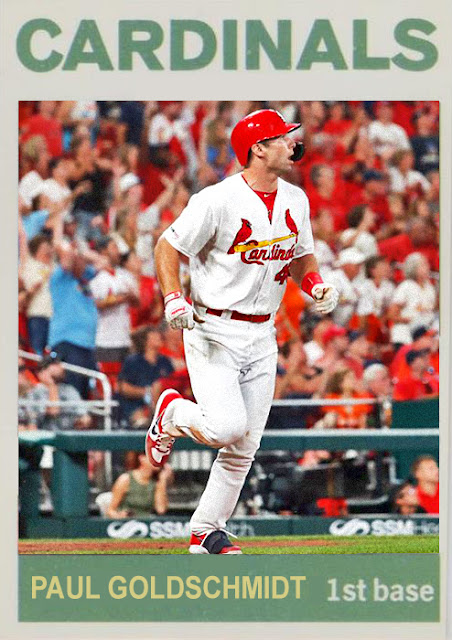 Up until last week, a lot of people were saying that the Bryce Harper contract may have been the most disappointing one of the offseason. Because the hip thing is bagging on Harper, and nobody wants to be un-hip.

Of course, Harper's having an amazing week and is finally turning into an offensive threat in Philly, so now people are having to rethink this. If Harper's not the big, disappointing free agent signing pre-2019, then...who can it be?

Now, I know what you're thinking. The Cardinals are in first place right now, they've edged the Cubs out of first, and are in the process of controlling the division. But...the Goldschmidt signing was the umpteenth move in a series of moves that had begun to shift the team's priorities in the wrong way.

Let's look at the 2011 team for a second. The offensive standout was Albert Pujols, and the team was built around him. Then protecting him you had heavy-hitters like Lance Berkman, Matt Holliday and Yadier Molina, and then around them you had more specific, sneakier guys like David Freese, Rafael Furcal and Skip Schumaker, and clutch guys like Jon Jay and Colby Rasmus. That is a solid lineup, but its also one whose centerpiece is obvious, and whose lineup is built around that centerpiece.

Now, let's look at the 2019 lineup. And let's ask...who is the centerpiece of this lineup?

It's hard to say.

Before the season, I would have said Matt Carpenter. After a few seasons of being bopped around the infield, he went wild during the second half of last year, finishing with 36 home runs, a career high. Now, Carpenter's batting .214 with 10 homers and some time on the IL. Aside from him, the centerpiece might be Yadier Molina, which would make sense from a veteran leadership aspect, but Yadi's had a down year statistically, and has spent a bit of time on the IL. Same with Marcell Ozuna, the guy signed to hit for power, and has in spurts, but...he's only hitting .259. All three of these guys are sort of being used in supporting roles this year.

So...when Goldschmidt was signed, you had to think he'd be used as a centerpiece, a sort of filler of the hole that Pujols filled for 10 years that had been open since. Goldy at his best is a .300 hitter who can hit for power and contact, and do a solid job at first. But since last year, his numbers have been down, and he's been a bit more human. And yes, a .290 average is human for Paul Goldschmidt.

And now we flash to this season, where Goldschmidt is batting .258, with 127 strikeouts, only 27 home runs and 66 RBIs, and some of his lowest general statistics to date. The first half of the 2018 season prepared us for this season, and this may be the new normal for Goldschmidt. He's having a very okay year, and he's, at 31, just phasing out of his prime. And this is what the Cardinals have signed up for.

Goldy's not the centerpiece, because he's not playing like it's his team yet. He doesn't seem as comfortable as he did in Phoenix. He's not what he was, and...it may be poetic justice to see the Cardinals handed their own Ryan Howard, but it does raise the question...if it's not Goldschmidt, or Carpenter, or Molina...who is the centerpiece of the Cardinals?

Well...it's looking like it's Paul de Jong. After years of building teams around a statistical and clubhouse giant, like Albert Pujols, the Cardinals have chosen the sabermetrically-sound contact hitter who keeps to himself and quietly sneaks along. It'd be like if the 2011 team built themselves around David Freese (which would've made me even angrier at them than I am now).

Is this what baseball is now? Or are the Cardinals just lucky? And is this luck about to run out?

Coming Tomorrow- The red-haired bearded slugger in LA. No, not that one, the other one.
Posted by Jordan at 10:19 PM