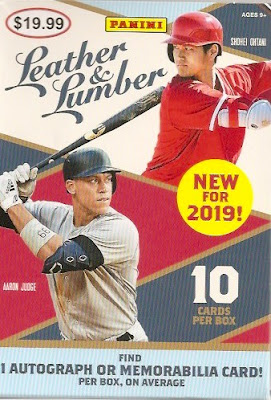 As a veteran retail plunderer, I'm interested to see which new products pop up on my radar at the local Target. Some new crossover releases, like Stadium Club and Chronicles, have worked as retail releases. Some, like Topps Fire, have not.

And now we have Leather and Lumber, an old Donruss/Playoff product that Panini have dusted off and repackaged for a logo-less generation. There are TEN CARDS PER BOX, and this is a 20 dollar product. So...steep price for this set, but I had to indulge anyway.

Let's see what these two blasters got us: 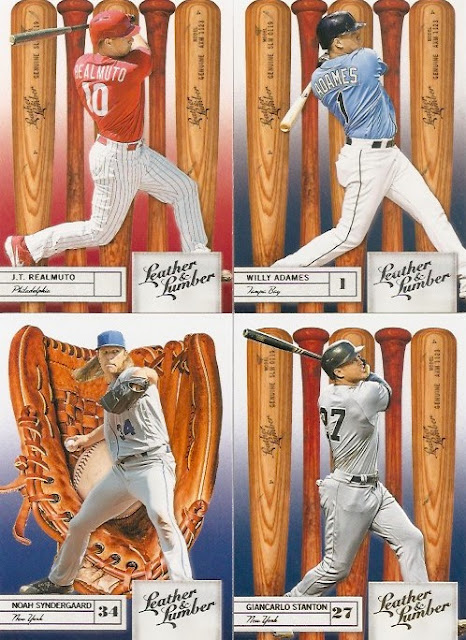 Pack 1- These are your base cards. Aren't they spiffy? I like the color-coordination, as well as the distinguishing of which players are better known with a glove or with a bat. The player selection is fairly obvious, though I do enjoy one of the first JT Realmuto in Philly cards, as well as usual picks from Thor and Giancarlo.

Each box yields a hit, hence the price, and... 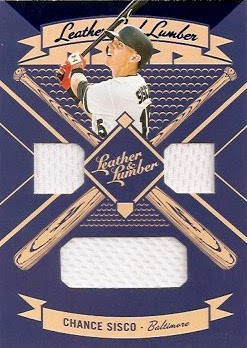 ...yeah, this was my first one. Not exactly a stellar hit, either. Sisco is definitely gaining ground, and getting more and more playing time in Baltimore, but...Chance Sisco is also one of those guys that you're most likely to pull a hit of in a modern product. Him, Francisco Mejia or Danny Jansen. So...not wild about this one, especially the wide range of white swatches we have. 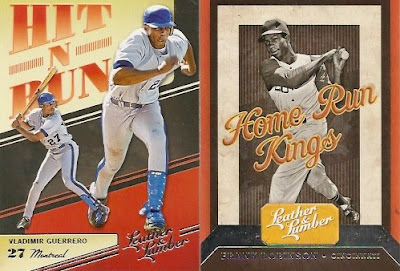 Pack 2- In blasters, one pack is base cards and a hit, and the other pack is the inserts. And my...what nice inserts are these. Vlad Sr.'s is a Hit N Run one, which has a nice use of foil and inset. Even better use of foil is Frank Robinson's Home Run Kings insert, a well-designed one. 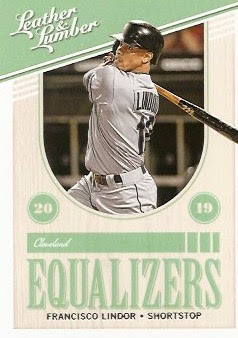 I kinda like the color scheme on this Equalizers insert of Lindor, though I'll agree that the photo is a bit of an afterthought compared to the design 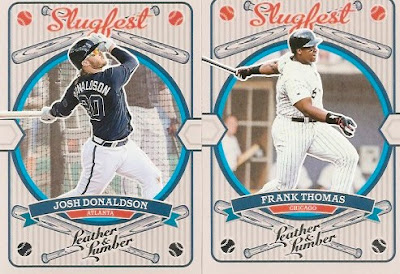 And probably the cooler insert here is Slugfest, which has a very inspired design. Yes, the Thomas is slightly miscut, though not as much as this scan infers. Donaldson and Thomas are good picks, too 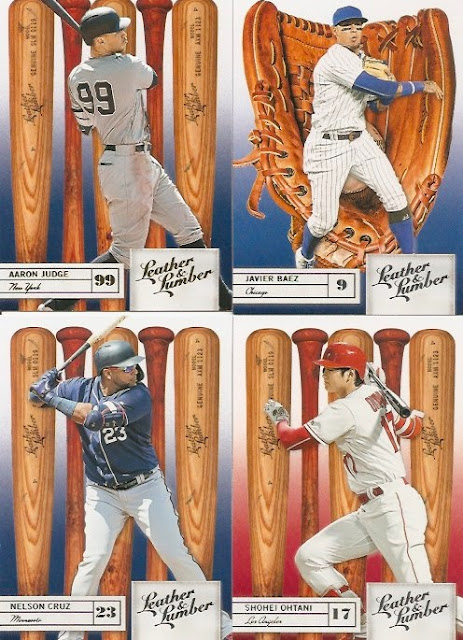 Box 2- Pack 3- More base cards, all of whom are welcome here. Judge's, like Stanton's in the previous box, has gold foil, which is probably some asinine unnumbered parallel. Whatever. 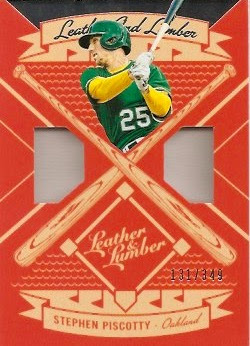 This is my other hit, and let me tell you- this is one thick-ass card. I've no idea WHY it's this thick, as it's not like the swatches, also white despite the scan's best interests, are raised in any way. It's just...unreasonably thick.

At least Stephen Piscotty is a slightly better person to get a hit of, though...again, white-ass swatches take away from it, even it it's numbered to 349. You have so many other fun colors for A's jerseys- use one of those!

[Also...this card is too thick to fit in my relics/hits binder. If I didn't have social anxiety, especially about trading, I'd say 'who wants it', but...idk if anybody even does] 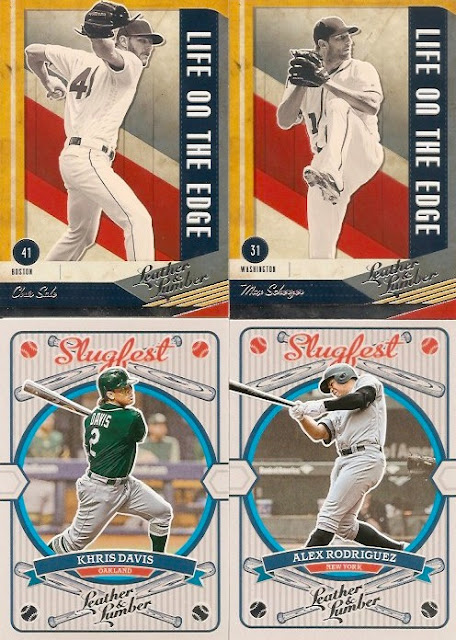 Pack 4- Scherzer and Sale are nice choices for the pitcher-centric Life on the Edge insert, and I do enjoy the color and stylization here, a bit like old propaganda posters. Khris Davis is a good choice for Slugfest, though card companies really need to stop making releases of A-Rod. 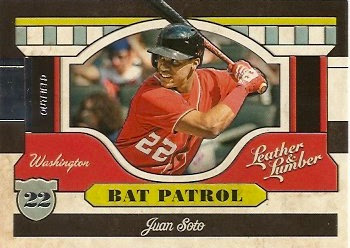 ...and this...admittedly AWESOME Bat Patrol insert of Juan Soto is probably my favorite card in the whole box. I just love the design on this thing.

So...overall, not a bad set, but a little fundamentally flawed, especially in its retail release. 10 cards for 20 bucks is not a great release model, and advertising a hit only to get a white-swatch of a C-lister is not worth the card-per-dollar ratio. Inserts are well designed, and there are some of the usual inspired touches from a Panini release, but...I'm not entirely sold.
Posted by Jordan at 3:53 PM