Rise of the Punisher 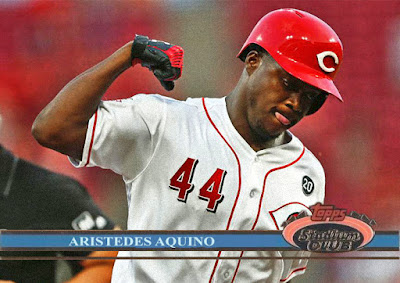 Aristedes Aquino has played 18 games, and ALREADY he has accumulated 11 home runs, 22 RBIs, AND A SUPER AWESOME NICKNAME.

However, the 25-year-old Aquino, who has been cooking in the Reds' minor league system for a little while, and hitting a ton of homers back there, is a fantastic fit for the Reds' lineup. The Reds spent the offseason carving out space for a big, strong power hitter, and made their lineup entertaining when Yasiel Puig was here. And then the trade happened, and...look, man, I'm of the opinion that the Reds didn't lose much in this trade. The Indians lost an ace, the Padres lost two major pieces...and the Reds lost a guy who was blocking an even better guy from taking the stage. They lose Puig, they get Aquino AND Bauer. Everybody wins.

Now the bad news is that despite Aquino's power heating up this lineup, the Reds have taken a dive in recent weeks, and are now 8 games out of the Wild Card spot. I'm not gonna say with confidence that they're out of the race, but 8 games is a wide margin, especially when you're dealing with teams like the Nationals. To say the Reds need to drum up some momentum is a vast understatement.

However, they've made a lot of really smart little moves lately. First of all, they plucked Freddy Galvis from Toronto, and he's been playing beautifully at 2nd, with 4 RBIs in 7 games. They also grabbed Kevin Gausman, and are using him in a relief role, which seems to be working well. And Bauer and Wood are just now beginning to gain some bite and lower their ERAs, which is nice.

I don't think this is a playoff team, but...this team's so fun that I kinda want them to succeed anyway.

Coming Tonight: For a shining moment, he was leading the league in a few pitching categories. Unfortunately, said shining moment was in April.
Posted by Jordan at 8:39 AM