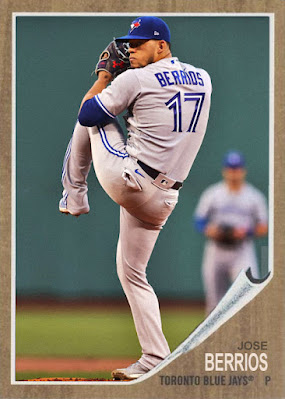 Saying the 2022 Toronto Blue Jays did better than their predecessors isn't saying much. They had a better regular season than the 2020 Jays, made it to the playoffs unlike the 2021 Jays, but, as they did in 2020, the Jays lost in the first rung of the playoffs. This is a more confident Jays team, having fired Charlie Montoyo and settling, at least for the moment, on John Schneider, and having added a few more crucial pieces in Matt Chapman, Kevin Gausman and, in his first full season, Alejandro Kirk. Going forward, even without Teoscar Hernandez, I expect the Jays to compete and go beyond their 2022 mark. But considering that what stopped them in both playoff campaigns was essentially not being as experienced as the bigger, badder teams, I wonder how much further they need to progress.
A good start would be a rebound season from Jose Berrios. While the former Twins standout did make all 32 of his starts this season, and struck out 149 with a 12-7 record, the core numbers were weaker, as Berrios came away with a 5.23 ERA and a 1.419 WHIP, in addition to giving up 100 earned runs this year. The Jays expected a lot from Berrios after signing him to a longer-term deal, and while he's still an innings-eater, he needs to have a quality season befitting of his Minnesota days.
2023 Prediction: Berrios is going to get off to a tremendous start in May and June and get an ASG nod out of it, but his second half will pale in comparison. 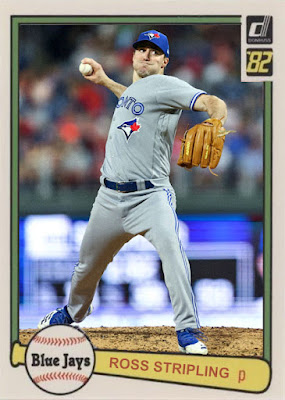 Although the Jays employed Hyun-Jin Ryu and Yusei Kikuchi this year, they didn't have full campaigns, which led to middleman Ross Stripling having a more productive rotation year this year. The former Dodger went 10-4 with a 3.01 ERA and a 1.020 WHIP in 32 appearances, 24 of them starts. It was undoubtedly one of Stripling's fullest campaigns since his 2018 breakout in LA, and it's a good sign for teams needing a free agent arm.
2023 Prediction: A really good team signs him as a low-rotation part and he surprises them with a full season of production. The Jays' sneakiest bullpen asset was sidearmer Adam Cimber, whose funky windup brought him some more success in Toronto in 2022. Cimber made a club-high 77 appearances in relief, and wound up with a 10-4 record, a 2.80 ERA, and 4 saves behind Jordan Romano. The man has made between 68 and 77 appearances every season that wasn't the 2020 one, and looks to continue his incredible production in 2023.
2023 Prediction: Maybe wishful thinking, but can we get this guy an ASG nomination? He friggin deserves one. I think he'll have more of the same production levels for the Jays, even if his ERA does go over 3 a bit. 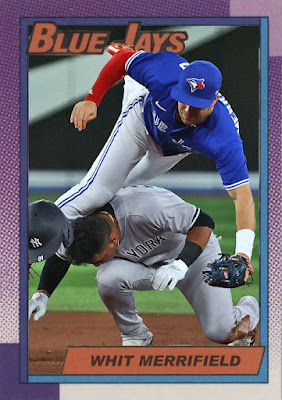 One of the most puzzling moves of the trade deadline was the Jays dealing for Whit Merrifield. They had an everyday third baseman in Matt Chapman, they had an everyday second baseman in Santiago Espinal. The thought was that they needed a utility infield piece with bat perks, despite Merrifield's numbers not being what they used to be. In 44 Toronto games, Merrifield hit .281 with 34 hits, 16 RBIs and 5 home runs. The Jays have Merrifield contracted for one more season, and could platoon him with Espinal at 2nd
2023 Prediction: Will have decent first half numbers, but I see Merrifield being bait for the Jays netting a BIG piece at the trade deadline, much like how the Padres used Luke Voit and Eric Hosmer.
Tomorrow, some dispatches from a Braves team I genuinely thought would repeat.
Posted by Jordan at 6:10 PM
Labels: Adam Cimber, Blue Jays, Custom Cards, Jose Berrios, Ross Stripling, Whit Merrifield