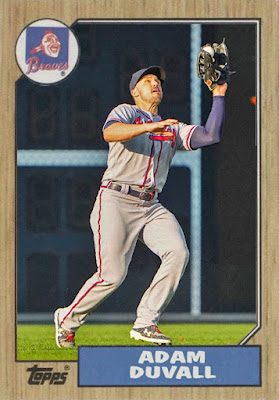 It is insanely hard, in this current playoff climate, for there to be repeat World Series winners. The playoffs now last so long that it's impossible for the 'best teams' to hold onto momentum the entire way through. The era of the Yankees or Braves winning every year may be behind us.

That being said, if anybody was gonna go back-to-back, I thought it was gonna be the Braves.

The 2021 team was a feel good come to prominence that no one expected, and it was a season I knew they'd be able to build on. Sure enough, the Braves outdo the Mets in the 11th hour for the division, make smarter decisions, call up killer pieces like Spencer Strider and Michael Harris, and look like a more confident, more pronounced team.

...and then they got trounced in the playoffs by the Phillies of all people. I sure do know how to call 'em.

The Braves have a lot to be proud of, though, and still probably have the strongest team in the NL East [sorry, Mets]. As much as some pieces are leaving in free agency, the big guns that make this team can't-miss baseball are tied up for most of the decade.

Adam Duvall, fortunately, is one of the aforementioned free agents. Not that his season was bad, as he did nearly make the All-Star team, and he hit 12 homers, but in a shortened 86-game season he still struck out 101 times and hit .213. Duvall is still very much a one-dimensional power hitter who is good to you when he's surging, and this year he really wasn't surging. Then he got injured, missed the playoffs and spent the rest of his contract at home. As much as he helped the team in 2021, I doubt he'll be missed.
2023 Prediction: A middle of the road team signs him to a 1-year deal, he does okay. The big years may be over. 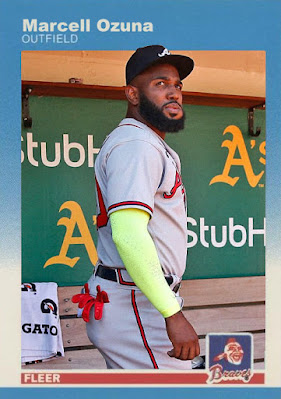 Then you have Marcell Ozuna. After the battery charges, the Braves haven't really decided what to think about Ozuna, even if he did have a monstrous 2020 season as a DH. With the team growing up and more outfielders and power hitters settling in, there's less of a place on this team for someone like Ozuna, and despite that he's still signed until 2024. This season, in 124 games he hit 56 RBIs and 23 homers while still being phased out as much as the Braves could.
2023 Prediction: Similar numbers. I don't even think the Braves WANT Ozuna to have anymore good seasons. If he does, he'll likely be trade bait for somebody. 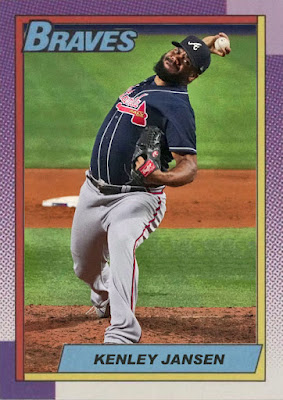 After being a respectable, consistent closer for the Los Angeles Dodgers for 10 seasons, Kenley Jansen took the free agency period to find a new place to play, and landed in Atlanta, who...moved Will Smith over to make room. Jansen, despite a 3.38 ERA, is a rock in the ninth, and led the NL in saves with 41, bringing his career total to 391, bringing him within 10 of 400 overall, and bringing him to 8th overall on  the all-time saves list, and three under former Braves closer Craig Kimbrel. It's clear that Jansen is etching his name in the history books as a closer, and while he wasn't perfect for the Braves, he did exactly what they signed him to do- dominate the ninth by any means necessary.
2023 Prediction: Similar to this year, somebody signs him, he gives them the traditional Jansen material with another 30-40 saves, and we might be doing this for a bit. I dunno if anyone wants to give him a long-term deal. 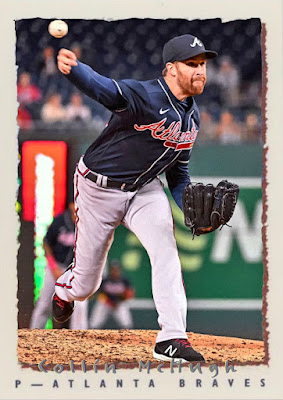 A few favorable bullpen heroes for the Braves this year. First, Collin McHugh, former Astros starter, has become a pretty efficient bullpen arm since stints with the Red Sox and Rays. In 58 appearances he sported a 2.60 ERA and 75 strikeouts, in addition to notching a considerable amount more innings than most relievers due to his starting experience. McHugh was a much-needed long-man presence for a varied relief squad.
2023 Prediction: I'm not sure who is on the Braves' shortlist to close, or if they're getting anybody, but...guys, Collin McHugh might be working the ninth for some spots this year, and that's alright with me. 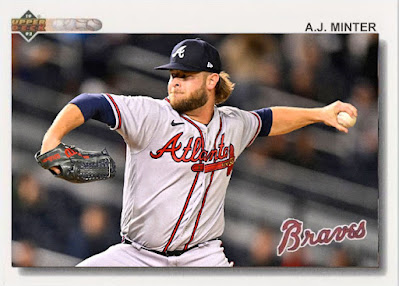 A.J. Minter, the perennial Braves bullpen favorite, had another strong year this year, with a 2.06 ERA, 94 Ks and 5 wins in 75 games. Minter is a workhorse and a club favorite, and the Braves are lucky to have him.
2023 Prediction: The way Minter has swung recently, 2023 is looking like a down season, but I still see big postseason moments coming his way. 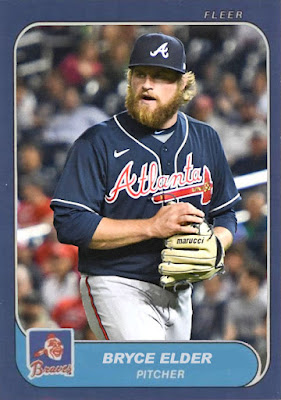 Even with a packed rotation, the Braves gave a few starts to rookie Bryce Elder, who already looks like he's been living in the woods for some time. Elder impressed for the most part, with a 3.17 ERA and 47 Ks in 10 games, 9 of them starts. Ultimately I think he was just low on the depth chart, and once Anderson came back he was back down in the minors.
2023 Prediction: Either there is room for him, and he has a Kyle Wright-esque breakout, or there isn't and he's a big piece in a trade deadline deal. It kinda depends on whether or not Mike Soroka is gonna be a thing in 2023, and I'm honestly not sure if he will be. 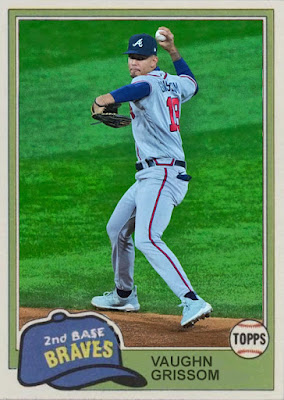 This story you've already heard, but...for the purposes of this post. So Ozzie Albies gets injured, right? The Braves do what they did when Acuna was injured and bring up a rookie who's ready to take on MLB work to take his place for a bit. Like Michael Harris before him, Vaughn Grissom took to the majors like a trout to water, and hit .291 with 18 RBIs and 5 homers in 41 games. Mind you, the man is 21 years old. Yes, Albies eventually rejoined the Braves lineup and Grissom became a bench man, but ooooh boy is this kid valuable. The good news for Braves fans is he can play shortstop, and might have to considering who might be leaving town.
2023 Prediction: Vaughn Grissom will be the next Brave to be locked up for the foreseeable future. 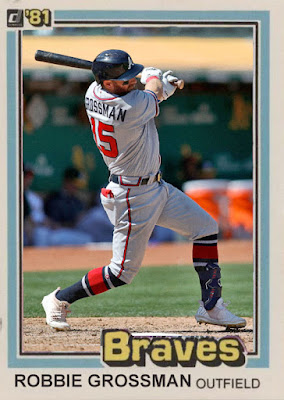 Onto the trade deadline acquisitions. Robbie Grossman was the most useful guy they got, as he'd been a durable, contact-hitting favorite in Detroit, and Oakland now that you mention it, for the last few years. Just a guy that's good to have around. In Atlanta, Grossman improved on a slow 2022 start and hit .217 with 30 hits and 22 RBIs in 46 games. He also posted some of his best defensive numbers since his 20s.
2023 Prediction: Back to what he was doing before, signing with non-competitive teams and having great seasons for them. 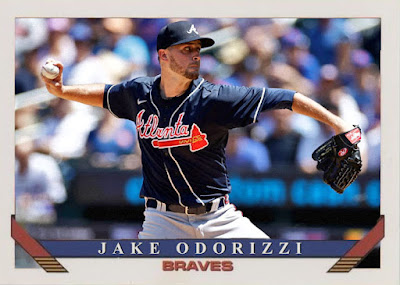 In a very interesting move, the Braves traded Will Smith to Houston for Jake Odorizzi, as they were better off with rotation security than bullpen security. Now, we know how this went, considering Smith got his second consecutive World Series ring with the Astros, but Odo was no slouch either, striking out 40 in 10 games, despite an ERA over 5, and giving up 2 runs in 3 playoff innings. He's still a reliable depth piece at this point in his career.
2023 Prediction: Well, he's at the back half of a rotation led by Jacob deGrom. The odds are, if he stays healthy, and he probably will, he will get a ton of starts next year. I'd love for deGrom to stay healthy, we all would, but...I feel like Odo is gonna get a lot of work next year in Texas. A lot like Jordan Lyles and Kyle Gibson once Kluber got hurt. 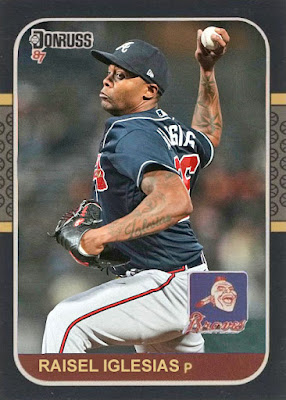 And in the second baffling trade the Braves made this July, they shipped Jesse Chavez and Tucker Davidson over to LA to have Raisel Iglesias work the eighth...which is odd, because working the ninth is more his thing. I think it was just in case Jansen fell apart. Still, Iglesias was excellent as a Brave, allowing only 1 earned run in 36 innings, and striking out 30/100 batters. Iglesias is still scary when he's on, and his back half numbers gave the Braves some good feelings about their long term bullpen security.
2023 Predictions: I'm thinking Iglesias is just the Braves' new closer, so he's gonna be really good at that for a couple years.

Tomorrow, a few members of a Brewers team that were so close to a playoff run.