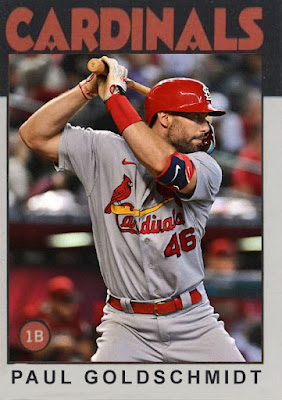 A lot of inexplicable things happened to the Cardinals in 2022. Firstly, Paul Goldschmidt, one of those players who'd never won an MVP before despite being overqualified, finally won an MVP. Secondly, the Cardinals swung one of the ballsiest trades of the year by getting the Yankees to pare down their already-slim rotation in exchange for Harrison Bader. Then, the Cardinals became a postseason favorite only to get shocked by the Phillies in the first round.
But most surprising of all? The 2022 St. Louis Cardinals were a competitive, intimidating Cardinals team, and I did not dislike them whatsoever.
Or at least not to the extent of years past. Around here, hating the Cardinals is pretty normal, considering what had happened in 2011, but this is a team I couldn't find a ton of things to dislike. Molina, Pujols and Wainwright reuniting for one last go, Goldy and Arenado having monster years, a ton of kids coming up and impressing people right off the bat. I really couldn't argue with any of it. Honestly, a hell of a year, no matter how it ended. And with Willson Contreras providing stability at catcher, a team with Goldschmidt, Arenado, Edman and Contreras does sound terrifying for 2023.
I didn't end up posting a second Goldy card for his MVP, so here's a nicer one. 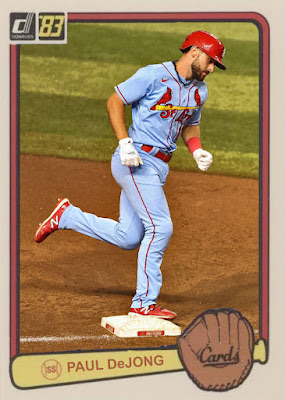 Paul deJong chose the wrong year to go inexplicably cold. The former contact favorite infielder began the season listless at the plate, and finished the year with a .157 average and 79 strikeouts in 77 games. Meanwhile, better options at short/infield, like Brendan Donovan, Nolan Gorman and, ultimately, Tommy Edman just appeared like that. DeJong spent a surprising amount of the season in the minors, though he did get activated late, at the expense of Gorman, to disappoint further in the postseason. It was the shortstop's second down year in a row, and one that was concerning to many fans.
2023 Prediction: If he keeps this up, he'll be released in no time. There's plenty of other people on this team that can play shortstop. 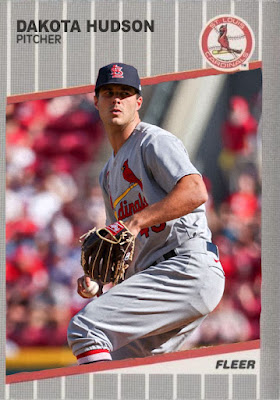 So Jack Flaherty was injured for most of the season....again. And signee Steven Matz only pitched 11 games this year. So, very quickly, Dakota Hudson, the designated fifth man in the rotation, became a much needed third man, and a failsafe for the two older hurlers ahead of him in the depth chart. Hudson posted a 8-7 record in 26 starts, with a 4.45 ERA. Hudson is clearly not the showiest starter in this pack, but he still went over 100 innings for this team, and they need guys like him if Flaherty's gonna keep getting hurt.
2023 Prediction: Will lead the team in IP. His ERA will fall below 4, and he'll have a respectable, if uneventful, full season. 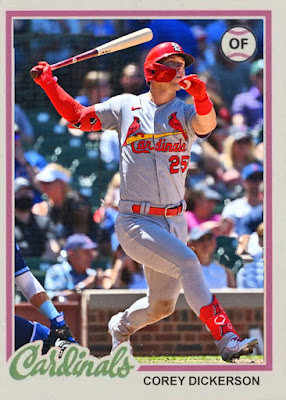 On a team with Tyler O'Neill, Brendan Donovan, Lars Nootbaar, Juan Yepez and, at least for a little while, Harrison Bader, you wouldn't think there'd be much need for someone like Corey Dickerson, especially with the DH position belonging to Albert Pujols. But the veteran power bat was able to accomplish some stuff as the backup outfielder, hitting .267 with 36 RBIs and 75 hits in 96 games. Obviously not to the levels he hit with Pittsburgh, but still a handy guy to have around.
2023 Prediction: A small-market team will sign him as a DH, and he'll have a decent year starting for them. 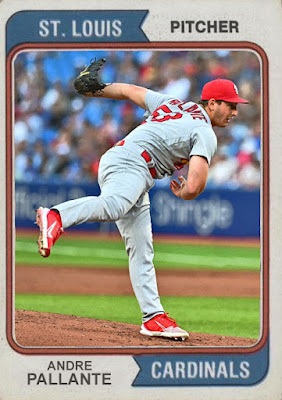 The hole in the rotation also meant some starting time for rookie Andre Pallante, who had a stellar year both in relief and as a starter. In 37 relief appearances he held a 2.35 ERA with 33 strikeouts. In 10 starts, he had a 3.98 ERA with 40 Ks. 3 wins in both roles. Pallante's already a favorite for his versatility and durability, and was on a lot of 'top rookie' lists this year.
2023 Prediction: I'm not sure if a rotation spot will be his initially, but he'll get some starts and do a lot of the same kind of things. 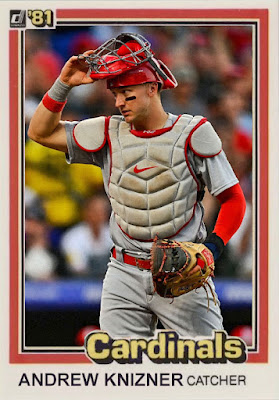 With Yadier Molina retiring after a Hall of Fame career, Andrew Knizner, for the past few years, has been primed as the heir apparent behind the plate in St. Louis. As a defender, while he is a step down from Molina, he's definitely pretty impressive. At the plate, he's never hit over .230. While 2022 was Knizner's best season with a 0.8 WAR, and while he did play 96 games this year, enough to make him the starting catcher for this team...his play did leave a ton to be desired, and while a lot of his season did get lost in the shuffle of Molina's departure, it has the potential to be on full display next season.
2023 Prediction: [sees who the Cardinals just signed for the next 5 years] well so much for that.. 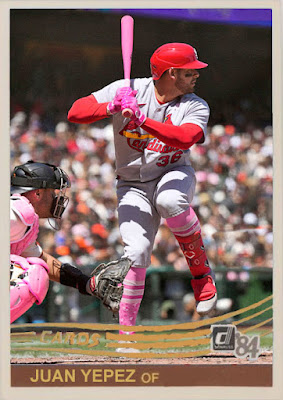 Juan Yepez is one of those players that, the second he comes to the plate you find yourself audibly going 'oh no'. That was certainly my reaction when he came off the bench during the wild card series, and sure enough he smoked one off of Jose Alvarado and made things tight for a bit. Yepez is a pure power hitter, and so playing with Pujols for a year may have done a ton to help. Unfortunately, Yepez is a terrible defender, which is why he was mostly a bench bat/DH this year. Still, the slugger hit .253 with 30 RBIs and 12 homers in 76 games, and had that postseason homer to cruise off of for a bit.
2023 Prediction: Will be the starting DH in 2023, and will hit 30 homers easily. The smartest move the Cardinals made at the deadline was getting two of Pittsburgh's best pitchers, Chris Stratton and Jose Quintana, for only a few pieces. Quintana had been on fire for the Pirates, and once he got to St. Louis the veteran hurler continued that progress, with a 2.01 ERA and 48 strikeouts in 12 starts. In his sole postseason start he only gave up 2 hits in 5 innings, and allowed no runs.
2023 Prediction: I'd initially predicted the Cards would re-sign JQ, but then the Mets went and got him, so this is true for the Mets now- he'll give them one really good year, one half decent and the other half injured. Next year will be the spottier year.

Tomorrow, a few clues as to why the Cubs were, while better than they were in 2021, an odd mess overall.
Posted by Jordan at 7:06 PM
Labels: Andre Pallante, Andrew Knizner, Cardinals, Corey Dickerson, Custom Cards, Dakota Hudson, Jose Quintana, Juan Yepez, Paul DeJong, Paul Goldschmidt