I had a busier day today, so you're getting the next ten now. Not much else to say. 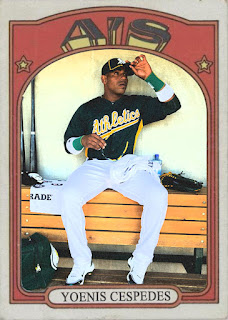 #20- Yoenis Cespedes, A's
This was the big rookie, in March anyway, so I really needed to go all out in customizing him. In the end, there was a nice dugout shot, with some great colors, and a great spring training uni. I still like how it came out. 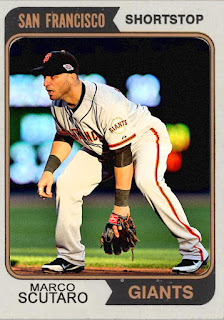 #19- Marco Scutaro, Giants
Another WS hero that needed customizing, and one that got a nice photo, too. I feel that the color in this is a lot more lively than it would have been, as the green, and the backboard colors are still vibrant. Plus, the foreground is just as eminent. 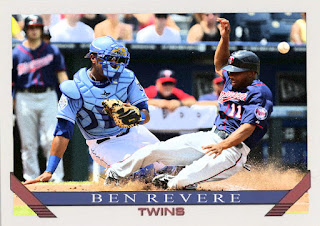 #18- Ben Revere, Twins.
You'll be finding a lot of nice sideways shot from here on in in the countdown, which is nice. This one is cool, as it features a nice play at the plate. The catcher is well lit, as well as Revere. You can see Ron Gardenhire bristling his chin bush from the dugout, too. Also, it's a nice shot of the right snap being taken, as the dust is still settling and Revere is still sliding. Nice shot for a future Phillie. 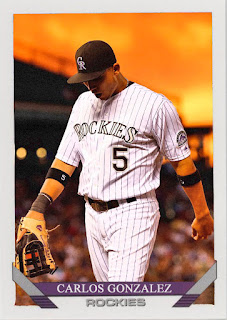 #17- Carlos Gonzalez, Rockies
This is what I call 'The Skyfall Card'. The reason behind this is there's a scene in this year's Skyfall, a great movie btw, where Javier Bardem's character, near the end, faces the camera as the background is awash in fire. There's orange and yellow and light all behind him, and he's just there, mad even, embracing the darkness. That shot is what I thought of the first time I saw this photo. The background was covered in the light of a sunset, or something, and there's CarGo walking away from it. An amazing shot, amounted to a great card. 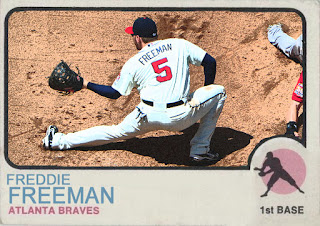 #16- Freddie Freeman, Braves
Another cool sideways shot, this one from more of a higher view. I feel like they took this from like a sky-cam, very high up, as the shadow indicates. It's still very cool, and the colors of the uniform contrast with the dirt. 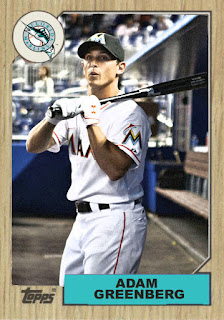 #15- Adam Greenberg, Marlins
One of the most amazing stories of the year, and one of the best fitting shot-to-set situations. 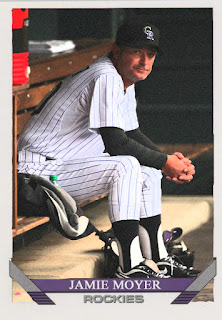 #14- Jamie Moyer, Rockies
Another great dugout shot, one of one of the longest-tenured pitchers in years. The shot reflects his story too, as he's just waiting there, like he's been his whole career, waiting for another shot, another chance to blow us all away. 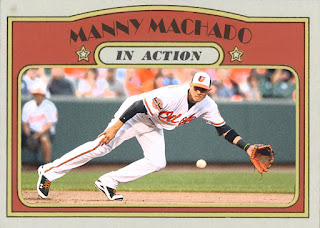 #13- Manny Machado, Orioles
Moving to the other end of the age spectrum, there is a shot of one of the best young players right now. I made sure to post this the week I went to an Orioles game, so I could show my O's-fan-cousin, and see if he liked it. Of course he did. 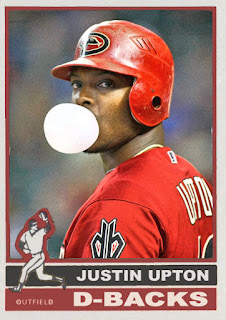 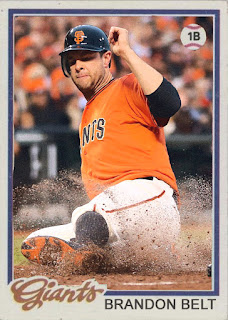 #11- Brandon Belt, Giants
Every postseason I make like 3 or 4 customs per team, in an effort to stay relevant when the teams do win. This was one of the better ones of that time, as the shot, and uniform, are brilliant. The best part is that this is one of the four first alphabetical ones, so I get to look at this one every time I open my folder.

Well, tomorrow I reveal the top ten. Which is nice.
Posted by Jordan at 11:02 PM
Labels: Custom Cards