Is it possible to celebrate your own work?

I really hope I'm not being too cocky here, but I think I had a great year of customizing. And I hope that's not a bad thing. Because I'm about to begin ranking my 40 best customs. Is that kinda touchy for the guy who made them to do? Either way, my opinion sorta matters, so here's the first ten. 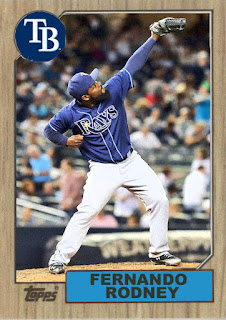 #40- Fernando Rodney, Rays
This was one of the better baseball stories of the year, one of the better closers of the 2000's returning to the Rays and pitching fire. He made the All Star Team, and probably got the Comeback award. I think this custom truly captures his stuff. There were a lot of 'closers celebrating' cards, but this one edges most of them out. 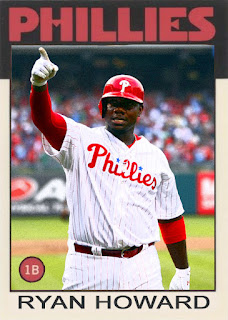 #39- Ryan Howard, Phillies. Last year I made a Howard custom that was incredibly good, and so good that it's hanging on my wall. This year, while it wasn't the best season for Howard, it was still a great treat to see his comeback, and to see it commemorated with this custom was cool. Again, it's not as good as his 'pointing the bad at the camera' shot from last year, but it's good. 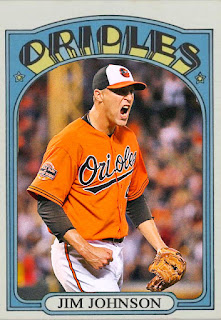 #38- Jim Johnson, Orioles. I posted this the day after I had returned from Camden Yards, the game the Orioles won because the umps screwed up. This card is cool, and uses the new uniforms to its advantage, but I was still pissed at the fact that the Yankees lost. Johnson wasn't even pitching very well. 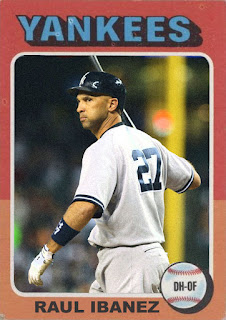 #37- Raul Ibanez, Yankees. Mr Clutch for us this year, represented by a shot that strikes fear into the hearts of relievers everywhere. This is similar to the Howard card from last year, because it looks like he's threatening to kill somebody. And he'll do it. 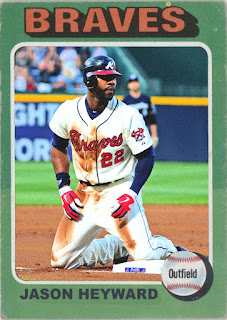 #36- Jason Heyward. The Braves' season was marred by a few setbacks, as was Heyward's. I really wish he'd start playing like he did his rookie season, and then it'd give this card justice. This was a nice basestealing shot, one that makes him look cool. 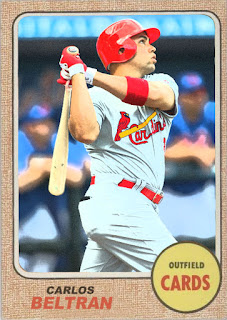 #35- Carlos Beltran, Cardinals. One of the most underrated Future Hall of Famers in baseball had a great season, and I celebrated that with a cool shot here. The colors may be a bit strong, but I think the red is strong, and outweighs the grey. 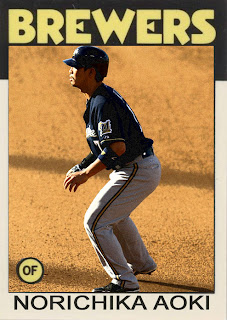 #34- Norichika Aoki, Brewers. When I first made this one, I thought this was one of my best. Now, that excitement has gone down a bit, but I still think it's a great card. Aoki's profile balanced by the light and the field is a cool image, one that wasn't very well received when it first came out. 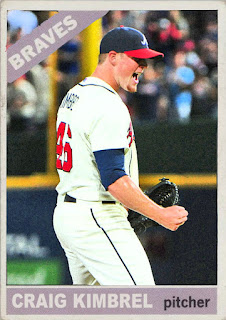 #33- Craig Kimbrel, Braves.Another celebrating closer shot, this one made awesomer by the background colors and Kimbrel's uniform. Craig may not have won the Cy Young this year, but he still had a great season, and this custom immortalizes. 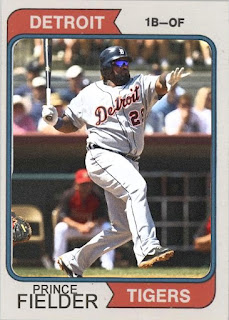 #32- Prince Fielder, Tigers. I knew I had to make a great custom for this guy, seeing as how he was one of the bigger acquisitions of 2012. So, I made one of him trotting to the bases after hitting one long. I think that worked pretty well. 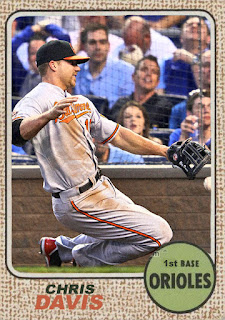 #31- Chris Davis, Orioles. The shot of his catch contrasted with the crowd reacting, mixed with the nice use of grain and great design, makes for a great, perfect custom.

I'll put up the next 10 tomorrow, and I'll promise there's more awesome ones coming.
Posted by Jordan at 4:19 PM
Labels: Custom Cards