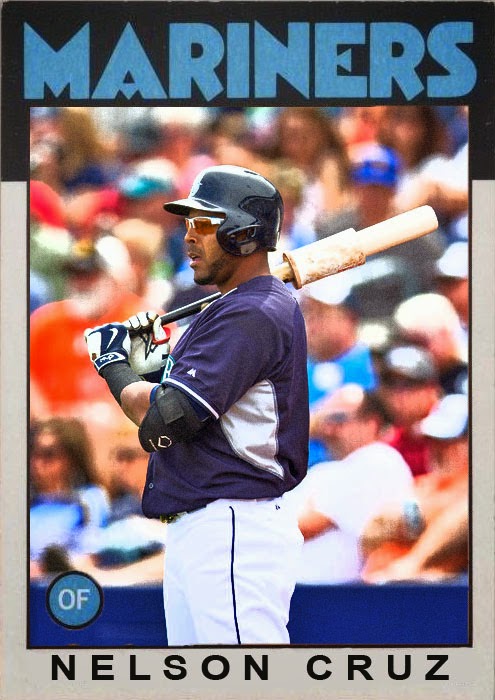 I lost respect for his when I found out he did HGHs, which is never a good sign in my book. It takes a lot to come back from that. Also, for the majority of his career he played for the Rangers, and I really, really don't like the Rangers, because for a good four year period they were really good and strong, while the Yankees...weren't really. Even in 2012, they had an...okay team, that just had some really nice luck. I'll even say that the Orioles should have made it that year, to the ALCS.

Where was I? Oh yeah, Nelson Cruz.

Nelson Cruz was on my no-fly list for a while (and by that I mean I didn't like him. Don't take that the wrong way), and then he joined the Orioles, a team that I generally enjoy. And he proceeded to hit a ton of home runs, get an All Star nod, and become one of the major figures in the game by the end of the year, which, I kind of thought was Juan Gonzalez' schtick. But whatever, I gave it a slide, and finally came around on Cruz.

Now, Nelson is on another team I enjoy, the Mariners, and he's in a DH position on a team that has been slowly growing in power without anyone noticing. If the Mariners are contenders in 2015, it will be thanks to Nelson Cruz and Robinson Cano. The two guys who've dominated the AL East in the last two seasons are on the same squad, which is pretty diabolical. If they both have amazing seasons, it could be pretty huge.

Hopefully I'll continue to like him as much as I did last season.

Coming Tomorrow (or whenever): Speaking of Mariners, quite possibly one of the greatest Seattle Mariners in history, now suiting up in what may be his final season, on a revitalized squad in Miami.
Posted by Jordan at 12:35 PM
Labels: Custom Cards, Mariners, Nelson Cruz, Spring Training