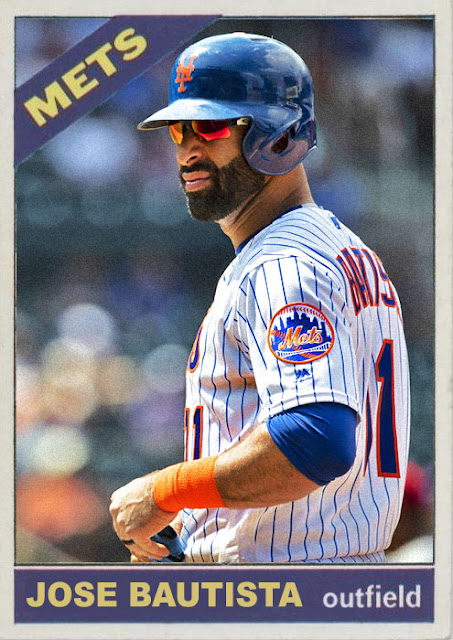 In 2013...Kevin Youkilis was traded to the Yankees. At that point, he was one of my least favorite players in the game, and somehow he was being trusted to play 3rd base for my Yankees in place of A-Rod. And I had to severely stomach the fact that someone so awful, horrible, and scary for my team...was now playing for said team...and I had to root for them.

Thankfully Youk's tenure in New York was very, very short, and I didn't have to worry about him being a long-tenured face of my team. And I find myself in a similar conundrum now.

Jose Bautista, who was putting up alright-enough numbers for the Mets, just landed in Philadelphia last night, and has been traded to the Phils in an effort to boost the lineup's power for the stretch run. I don't think this is a move for the future of the team, because...I mean, look at him, he's 37! His numbers haven't been too spectacular since the bat flip. Also, he wasn't even supposed to play this season- the Rangers dropped him before the season started, and he was only a last-minute addition to the Braves roster.

So...the Phillies are taking a serious gamble on a guy who hasn't played particularly well since 2015. If that. And it's because they're desperate to make the WC race, and because they want to catch up to Atlanta, which...I'm not thinking they'll be able to do. And even if they did, I don't think Bautista would really be the catalyst. He's over the hill, he's a career power hitter, and he barely hits for average. What were the Phillies expecting? I don't know if they wanted a one-dimensional guy for this run, but...here he is. Huzzah.

And even worse...I still don't love this guy after what he did to my Yankees all those years. I never liked him, and now he's playing for my team. Because of course.

I dunno, this could end up being fine after all, but I'm still very wary of the entire thing. And will probably continue to be so.
Posted by Jordan at 2:37 PM