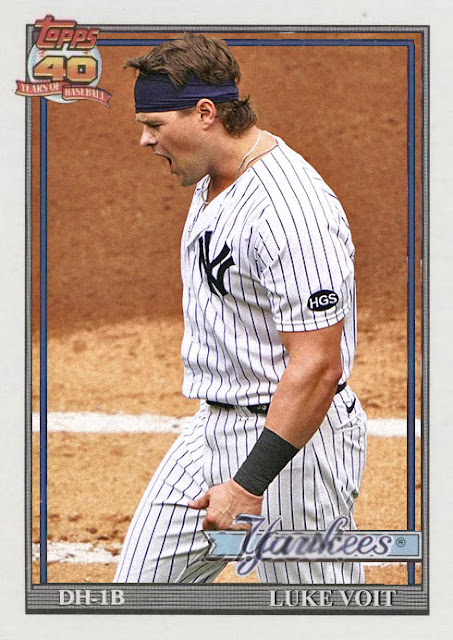 Gotta be nice to be Luke Voit right now. Dude hasn't been this hot since August 2018, when he came up in the Bronx, and now he's the starting 1st baseman [Mike Ford has been demoted], has the most home runs in baseball, is a MVP CANDIDATE, and is part of a now-strong Yankee battery along with DJ LeMabieu, Gio Urshela, Clint Frazier and...yeah, and Judge and Stanton. But this season has proved that the Yankees can still be a playoff team with spotty reception from their two marquee stars, as well as Gleyber Torres. LeMahieu and Voit have MVP campaigns, and LeMahieu actually has a nice shot at the award.

The pitching has also strengthened a great deal, and the core of Gerrit Cole, Masahiro Tanaka, J.A. Happ and Deivi Garcia is one I'd trust in playoff formation. Yes, Garcia and Tanaka have been rocked lately, but they've still had fine seasons. Happ has engineered a solid comeback after a slow start, and now has a 3.25 ERA with 39 Ks. And Gerrit Cole is...Gerrit Cole. If it weren't for Shane Bieber I'd say he has a shot for a Cy Young.

However, this is still a 2nd-place Yankee team, who likely will only be 4th or 5th seed, going up against someone like the Twins who, while not 1st place either, still could be tough. Like usual over the last few years, it's not gonna be easy for them to get to the end, and they have some flaws that could inevitably keep them back a few rungs. But if they end the season with the right momentum, they could take off this October. I'm not 100% certain, but...it would certainly be nice.

Coming Tonight: Rookie for a team that is desperately hanging onto slim playoff chances.