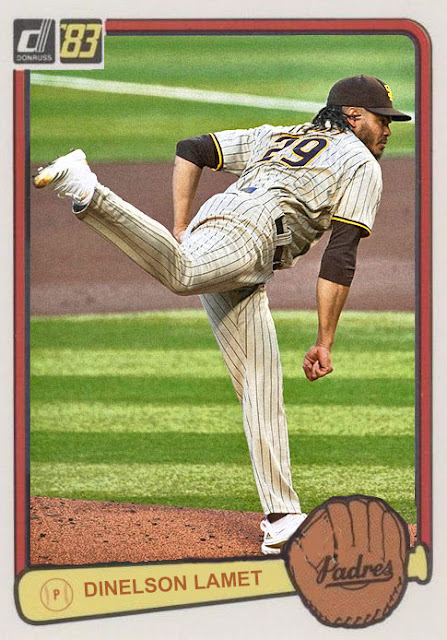 First of all, Dinelson Lamet. Last season, after his return from a few seasons of relative obscurity, I thought he fit well into the youth-driven core of Paddack-Lauer-Lucchesi-Strahm. This year, Lamet came alive, with a 2.07 ERA, 89 strikeouts, a 3-1 record in 11 games, and a .872 WHIP. Lamet has been one of the most reliable starters in San Diego, even as Chris Paddack has lowered his ERA, Zach Davies has won 7 games, and Mike Clevinger has come in with a vengeance. Lamet has some serious abilities, and has been stymieing opposing batters all season. I can't see why he won't be a huge weapon in the postseason, especially after a lower-seeded team.

Also...you have Jayce Tingler making quick decisions in his first year, Manny Machado and Fernando Tatis FINALLY becoming a killer 1-2 combo, and Jake Cronenworth looking like a pretty good choice for Rookie of the Year, essentially being a better version of Cory Spangenberg. Plus, Will Myers, Eric Hosmer, Garrett Richards, Drew Pomeranz and Trent Grisham are all playing really well.

This is one of the first times where every little move the Padres made has just paid off in unison like this...except maybe for Tommy Pham, but he's doing his best.

The colossal power of the Padres as a potential playoff team is a wonderful thing, and like I said they'll be seeded higher than most wild card teams, so they could square off against a lower-tier team, perhaps one of the teams vying for spots right now [Cincinnati, Philly, San Francisco, St. Louis, Miami]. It'll be fun to see how they do in this arrangement, even if there's a chance it may end kinda quickly. Just nice to see them back in October.

Coming Tomorrow- A New York Yankee has the most home runs in baseball right now. How awesome is that?