Bohm is Where the Heart Is 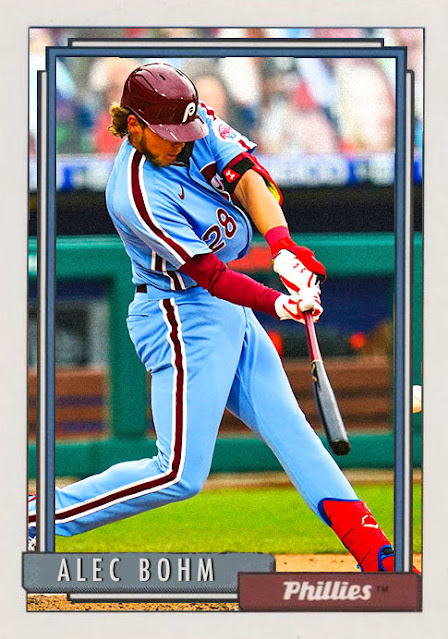 With only three games left to play, all of which against the AL-leading Tampa Bay Rays, the Philadelphia Phillies must decide, rather quickly, if they want to be a playoff team. Because...it's coming down to the wire and I'm not sure if they've figured it out yet.

As I write this, they're hitting well off the Rays, Harper has an RBI or two, Velasquez is keeping runs under his lid, and the team looks competent. But the fact of the matter is that the Phillies aren't always so well-put-together. They have games where they get rocked by opposing teams, or they bring out Jake Arrieta and he gives up 6 runs, or something like that. They're good enough to be in the picture, but not good enough to confidently say 'hey, we're way over .500, give us a spot'. No, they still have to fight with Milwaukee, San Francisco, Cincinnati and Miami for the last three spots, and Miami, Cincinnati and San Francisco are looking slightly better right now.

And...look...in a normal year, we wouldn't be having this conversation, Phillies fans would be already bitching about the Eagles, and we'd just move on at the end of the month. But because we have 8 spots, and because the Phillies are still in the top half of the division, we have to worry about this. And...I'm beginning to lose faith.

In concept, this is a cool team. Harper-Realmuto-Hoskins-McCutchen works as a core, Wheeler-Nola-Eflin is a great pitching trio, Alec Bohm has been a fantastic rookie third baseman, Jean Segura, Adam Haseley, Andrew Knapp and Didi Gregorius have improved over time, and Joe Girardi has the right idea. But because of little things, like the back half of the rotation, and especially the bullpen, they haven't been able to really convince people they're for real, and...honestly, they really aren't yet. The Phillies are good, but they may be outdone by the Giants and Reds. Right now they're .5 games back, and the Brewers won the first game of the doubleheader and are tied with them.

Unless somebody gets real cold, the Phils may be left out of the race. It may be another Phils heartbreak. I'm prepared for either outcome, but...we should have been able to avoid this.

Coming Tomorrow- They have the Cy Young winner, and a serious MVP candidate, on their team. They're also looking at a lower-but-still-formidable seed in the playoffs. They're gonna need all the help they can get, and thankfully they still have this all-star shortstop.