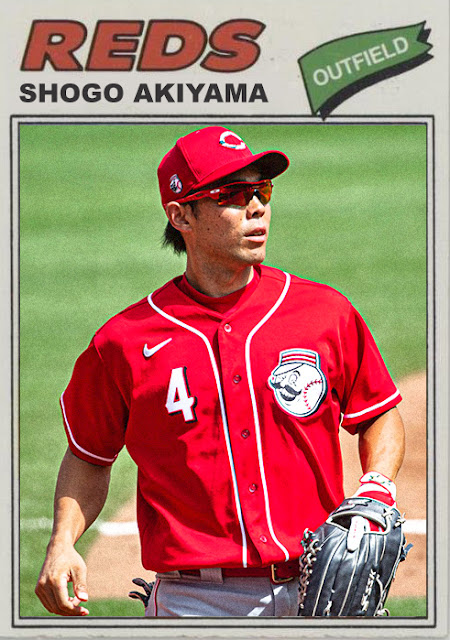 I'll repeat the statement I had about the 2019 team, cause it still applies, but my is this team fun to talk about each week. Just so many fun players in control at once, even making cameo appearances for brief stints. This is a team with three catchers, all of whom can hit, and like 8 viable starters, and like a ton of former All Star starters doing kinda okay, and...the energy, while chaotic, is working this year. This is the first playoff Reds team we've had in 8 years.

And...although this team does have some novelty-type feelings throughout...look at the proposed starters for their wild card series. Trevor Bauer, Luis Castillo, Sonny Gray. Think about that shit. Any one of those games, whoever gets the seed against the Reds is gonna have a HELL of a time trying to hit one of those guys. Plus, they can throw in Tyler Mahle for a Game 4 or 5, and still get the same results. And...they still have Lucas Sims, Archie Bradley, Michael Lorenzen, Amir Garrett, Tejay Antone and Raisel Iglesias as viable bullpen options, all of whom are killing it right now. So...pitching-wise, this is a playoff team. No doubt about it.

It's just gonna be a matter of will the lineup show up. This season has had impressive offensive showings from Nick Castellanos, Shogo Akiyama, Tucker Barnhart, Eugenio Suarez, Mike Moustakas, Jesse Winker and Joey Votto...but not all at once. This playoff series is going to require this entire spotty lineup to be on the same page at the same time, and allow for maximum run support against one of the toughest teams in the NL [assuming they're getting Atlanta or Chicago]. Just having a few guys get bloop hits isn't going to cut it. They're going to need the full scope of the force, and they're gonna need peak numbers from Castellanos, Suarez and Moustakas, as those guys in even 2019 form would be helpful this year.

The Reds may seem like an easy playoff opponent, but I see some fight in them that could spoil even the toughest matchup.

Coming Tomorrow- I got 3 years without a contending Toronto Blue Jays team. I guess that was enough. One of their veterans tomorrow.