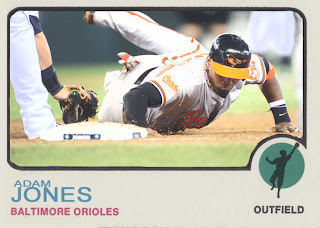 When talk of the best young outfielder in the game comes by, not a lot of people usually mention this guy, Adam Jones, overlooking him for the likes of Heyward, Jackson, and Ellisbury. But after last week, where he made a spectacular catch against the centerfield wall, maybe the talk will accelerate. You see, ever since the 2009 season, where he was coming up in a bleak looking setting, I knew a few people on that team would be stars. Him, Reimold, Weiters and maybe David Hernandez. I was wrong about the last one. But Adam Jones will be huge one day... and it better be soon.

Coming Tomorrow- In 2008, everyone knew him. In 2010, everyone traded him off their fantasy team. But can this Cub reclaim the hype?
Posted by Jordan at 12:53 PM