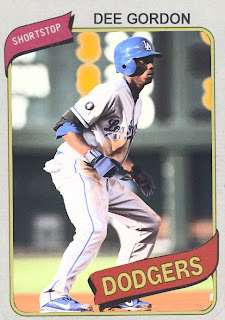 Not a lot of people know of Dee Gordon, other than the fact that he plays for the Dodgers and he's Tom Gordon's kid. However, I've seen him play on television a few times recently, and I am very impressed with this guy. He's extremely speedy, he's young, thin, good at his position. He isn't the strongest of hitters, but he can bunt when he needs to. In other words, he is a clone of Juan Pierre. And while Gordon and the Dodgers may not strike October this year...sooner or later, Dee Gordon will steal a base in the World Series. Hopefully, that is.

Coming Tomorrow- Going from a new speedy player to an older, stronger player, this guy probably was the most overrated player in baseball a few years ago. Now...he's retaining his title with Texas.
Posted by Jordan at 10:36 AM