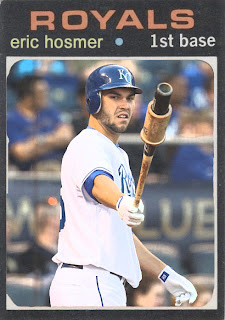 Right now, the man who had the most hype in 2010 is still rehabilitating, which says a few things about hype. I don't remember hearing too much hype about Eric Hosmer before the year started. He snuck in quietly, and started going crazy at the plate in the last two weeks. And suddenly, while the Royals had absolutely no chance last year, now it's a young team, with a few strong players, and surprising pitching (Who knew Jeff Francis could rebound?). I think if Hosmer can keep it up, we could be looking at this team again in October. Could be.

Also, I apologize for my lack of posting in the last few days. I know I owe some people some trades (okay, maybe just one person), but I'm about to begin finals soon in school, and I'm getting homework out the wazoo. People that talk about the joys of being young don't remember this crap. So if I'm a little late sending out trade packages, or making more customs, blame the school systems and not me. I'll be back near the middle of June, when my freetime will have skyrocketed.

Coming Tomorrow (?)- The only person named Russell that gets an ounce of respect.
Posted by Jordan at 6:43 AM