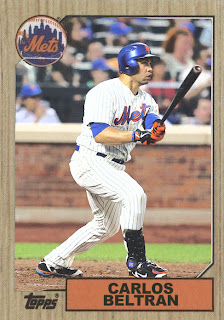 I know I've been featuring a lot of throwbacks in the last few months, but how could I resist a Mets throwback, to the more vibrant blues and pinstripes of the 70's and 80's (I think). Of course, the Mets might have been wearing the throwbacks to remind fans of a time when the Mets were good, when they had big stars like Seaver, Carter and Gooden. The Mets are a franchise whose best days were years ago. Which brings me to Carlos Beltran, the aging slugger whose best days were years ago. When he was with the Royals, Beltran was quick, strong, and just what his team needed. Now, in his 30's with New York, he can only bring a portion of what he brought in the 90's and early 2000's to the table. And that's sad, because his team needs him.

Coming Tomorrow- This guy made his ML Debut recently, and in a last place team, he hopes to perform well.
Posted by Jordan at 11:28 AM