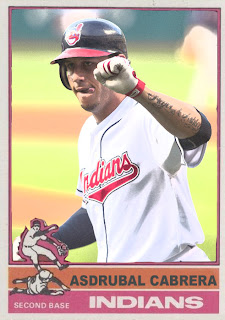 Ah, Asdrubal Cabrera. The Turd Ferguson of the MLB. Let's start by saying that this guy's team is circling 1st in the AL Central, which is pretty hard to do usually. Even with a lack of star power, the Indians are becoming a fan favorite. And this guy's been playing pretty good in the infield.

But then, there is the matter of his first name. I know it may be pretty popular in some parts of the world, but over on our continent, fans of Comedy Central are prone to snicker at his first name. Mainly for two reasons. One, because it is followed by a normal-by-Central-American-standards Last name. And Two, because it sounds like "Ass-dribble". Seriously. I'm surprised Frank Miller hasn't used that first name as a character name in one of his comic books.

Coming Tomorrow- A pitcher for Anahiem who may have been overshadowed by the team's bigger guns.
Posted by Jordan at 10:28 AM