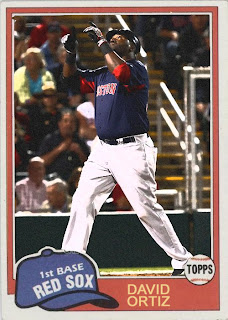 You'd think this is the trifecta. I hate the Red Sox, and I hate April Fool's Day. But, contrary to popular belief, I don't hate David Ortiz.

And that's not an April Fool's Prank.

Even in the days where I rarely followed baseball, Ortiz was never the enemy in Boston. It was Manny, usually. Then it became Pedrioa and Ellisbury, and it's ALWAYS been Youkilis. But I never really hated Ortiz. Why? Because he seems like a decent enough human being, having a kid he loves and all that. And also, because I can actually respect his duties at the plate...against everyone else but the Yankees.

The media's predicting that Boston would come in 3rd this year. I'm one of the only guys secretly hoping for a Baltimore uprising, making them come in 4th, or even 5th. But Ortiz...he's probably one of the only players on the team I WOULDN'T want hit by a bus.

Coming Tomorrow- Five years ago he was the most fearsome pitcher in the National League. Today he's recovering from two injury-missed seasons, hoping to return to his prime.
Posted by Jordan at 10:25 AM
Labels: Custom Cards, David Ortiz, Red Sox