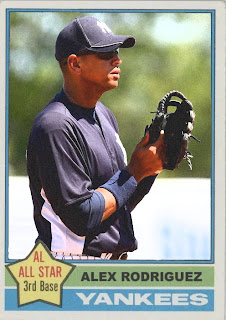 This man does not deserve your crap.

Yes, for the past few years Alex Rodriguez, former favorite player of mine, has been the butt of numerous jokes around the MLB. The punchline: A-Rod sucks.

Let's get one thing straight- A-Rod isn't exactly terrible at baseball. Hell, he can still swing a bat and play third base. But he hasn't had a great run the last few years. He's gone from the best shortstop in baseball to...well, A-Rod. He's developed a new type of classification.

Nevertheless, the guy does not deserve all of the crap everyone's giving him. I can confess that maybe he can have some of it, cause I'll never forgive him for taking steroids. But at least loosen up on him if he has one decent season.

Coming Tomorrow- I don't know. I gotta make more.
Posted by Jordan at 3:02 PM
Labels: Alex Rodriguez, Boy will I get letters about this one, Custom Cards, Yankees