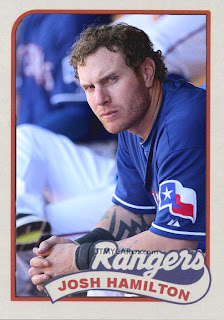 It's hard to believe, but this is only Josh Hamilton's sixth official MLB season. What amazes me is that in six long years, Hamilton has become one of the premier players in the league, one of the fiercest hitters, and one of the game's brightest stars. And he only walked in five years ago this season. To put things in perspective: In 2007, the Rangers finished in last place, and ended the season trading Mark Texiera to Atlanta, and trading Edinson Volquez to Cincinatti.

The Rangers have made it to the World Series two years in a row. They've been the team to beat in the AL for the past few seasons, and Hamilton is only a small chunk of an intimidating offense. The man has thankfully overcome his drug problems, and has become one of the game's best overall hitters.