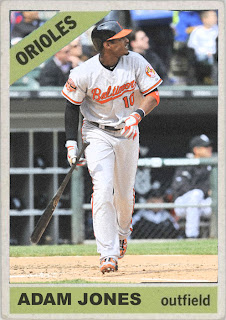 You have to feel bad for the Orioles: they can't help it, they're just facing a crummy division. You have the Yankees, Red Sox and Rays, three teams who normally play musical chairs ever September for a spot in the playoffs. Then you have the Blue Jays, who, while not terrible, are still good enough to stay out of last. I'll say that if they were in any other division, the Orioles would have a sliver of a chance of staying out of last. But sadly, year after year they'll continue to be bested, hopefully until the three other teams start sucking, and the Jays stop being better than them.

Every season I go out to an Orioles game, get some cheap seats with a friend of my dad's, and enjoy the game. Because the Orioles are a fun team, with no care for winning or losing, they're just a fun team to watch. Adam Jones acts as a bit of a ringleader- he's a great outfielder who's quick and can hit pretty well. In other words, he's the dreadlockless version of Andrew McCutchen. Although it's nice when he's really on his game, and it's always a joy to watch him side-bump with Nick Markakis every time they win.

Coming Tomorrow- Last season it was CJ Wilson. Now, there's a new pitcher in Texas that has come out of nowhere and is dominating the mound.
Posted by Jordan at 9:11 PM