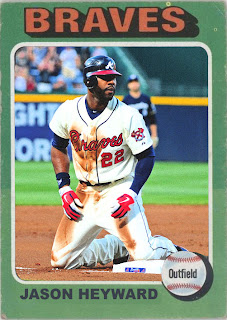 This season there have been four surprises in the NL East, okay maybe five.

One- the unpredictable ascent of the Washington Nationals.
Two- The Pretty-Much-Predictable decline of my own Philadelphia Phillies
Three- The Titanic Decline of the Miami Marlins
Four- The Entirely Impossible start of the New York Mets
Five- The fact that the Young, Strong Atlanta Braves are stuck in the middle.

Another surprise- Jason Heyward has yet to become the household name he was destined to be. And it's a shame: after a stellar rookie season, he was destined for a huge career, then was saddled with a sophomore slump last year. The guy has talent. His team really needs him, and they sure as hell don't need another David Justice, or another Mark Lemke (I know, how dare I say his name in vain.) They need Jason Freaking Heyward, and they need the one from 2010.

Whether they'll get him or not is beyond me. But you never know; if Jason Heyward gets back to his old self, it won't be the craziest happening in the NL East.

Tomorrow- Meanwhile, all the way on the other side of the country, Some form of magic is happening to a struggling team, and I'm not just referring to their new owner. Their big star is on the slate for tomorrow.
Posted by Jordan at 7:58 PM
Labels: Braves, Custom Cards, Jason Heyward, what is wrong with this picture