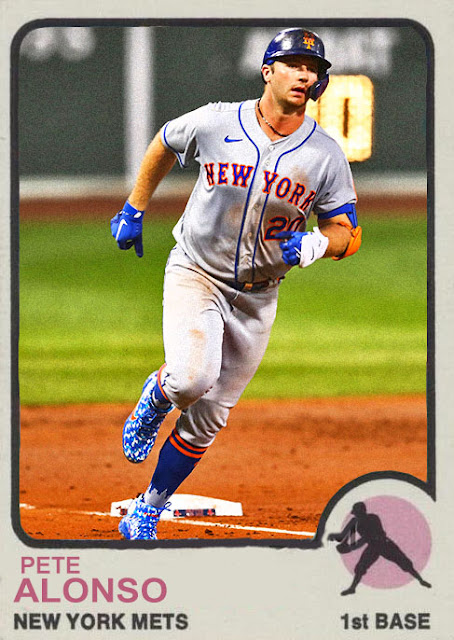 It's weird. There were aspects I knew wouldn't work, like Rick Porcello and Edwin Diaz, and there were aspects that surprised me, like Michael Wacha and Yoenis Cespedes, but this is pretty much the Mets team I thought we'd  be getting this year. They're getting by, which helps.

The big thing with this Mets team that we all saw coming in like March is Pete Alonso's more human numbers. Last  time I saw my Mets fan cousin, which was like in May, I asked him how many homers he thought Pete would have hit by then  if the season were normal, and he answered 'like 10?'. And yeah, so far Polar Bear Pete only has one home run and a mild average. I don't think this means that  2019 was a fluke, I just think it means that 2019 was a normal season and this is a weird one, and Pete's numbers will probably a bit closer to that in 2021 if the earth has its head on straight next year.

It definitely helps that the usual core of this Mets team, including DeGrom, McNeil, Cano, Matz and Ramos, are all doing well. And the new guys they're bringing  up aren't bad either. Andres Gimenez is getting more starts at third, and while it's weird to me that a guy who's 3 years younger than me is the starting 3rd baseman for the Mets, he's not bad at it. Equally young is David Peterson, who's 2 months older than me and has a name very close to a Mets fan I knew at college. Peterson had a killer debut as a starter, and somehow has more wins than Jacob DeGrom, who seems to be trying  his usual 'no, you guys don't need to give me run support or bullpen  support, I'll just win another Cy Young all by my lonesome again' schtick.

The Mets are still technically in third, but it's early and we have to assume the Marlins would have lost 3 more games by now. I definitely think they're an NL contender, though the Braves might have more of  an edge on the division.

Coming Tomorrow- Okay, so despite his team having a Cy Young candidate after a week of play, he's still one of the offensive standouts.
Posted by Jordan at 9:18 PM
Labels: Custom Cards, Mets, Pete Alonso