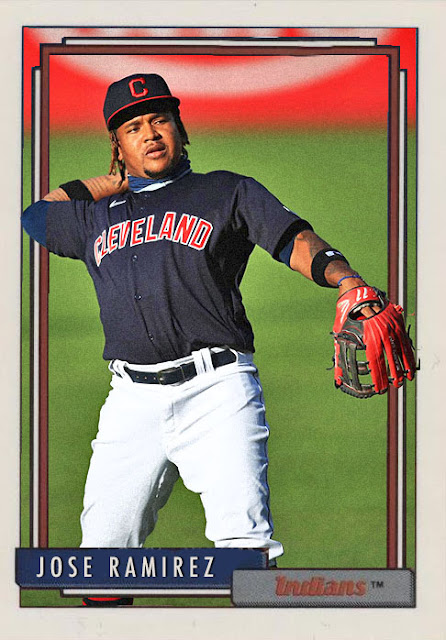 So, Shane Bieber's the best pitcher in  baseball right now and if he keeps it up he's gonna bring home the tribe's third Cy Young in 7 years. But I didn't make a custom of him yet cause I'm waiting for better photos. Usually when I do that, I leave the player open to disappoint me. He'll pitch next  during a series in Cincinnati, and while they're good...let's be honest, so are the Twins, and they couldn't hit anything the other night.

Instead, I have a Jose Ramirez custom. He's the best hitter in Cleveland right now and he's having  an improved season after a step backwards in 2019. I hope this will suffice.

The Indians' rise after a week of play back to first place in the AL Central is more surprising to me than it should have been. They sunk last year due to injuries and  inefficiency,  but I never thought they were suddenly a bad team. The way  the team bulked up with cheap free agents this offseason rather  than making a big move...worried me. I wasn't convinced that they would compete. And now they're first in the central and having arguably the best pitching staff in the bigs [even with Clevinger's woes last night, that 6-man rotation is strong  s hell and might be a force this year], and the  Twins are...good but catching  up.

Could this be 2020? The year the Unsinkable Twins sink, and the Indians are there to watch  them?

The one thing about this team is that the lineup so far is trailing the pitching in terms of accomplishments. Ramirez, the Santanas, Cesar Hernandez and Lindor are off to nice starts, but  the depth that saved them last year  hasn't showed up yet. Sandy Leon is starting games in place of Roberto Perez, and he's as ineffective as he was in Boston. Oscar Mercado, Jordan Luplow, Bradley Zimmer and Franmil Reyes are still catching up. It's early, yes, but the lineup isn't there yet.

But still, this is a promising and intriguing start for this Indians team, and I hope they keep it up.