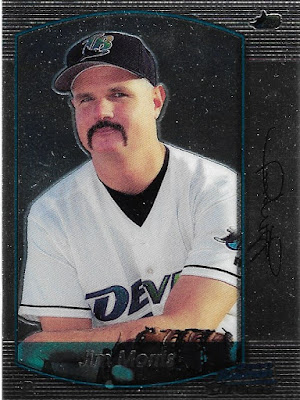 I'd been getting packages sporadically from baseballcardstore.ca for the last few months. They have a good catalog, there's a lot of cool stuff that can be found there, and it does take some hours of scouring but it's worth it.

For instance, a few weeks back I just started leafing around in places I hadn't looked, got a nice cart together and went with it. And then a few days ago the package arrived, and most of the stuff which I'd forgotten I'd ordered popped for me even more. It's a very nice feeling.

Like, I'd forgotten I went for the 2000 BowChro Jim Morris, aka the subject of the 2002 Dennis Quaid film The Rookie. That's insanely cool, even if it is a niche sort of thing that only odd collectors like me are willing to go for.

This shipment had a lot of interesting stuff like that. 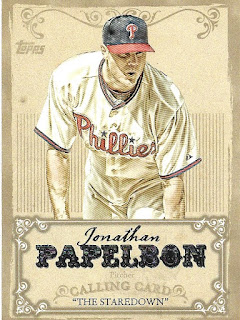 Relatively Recent Stuff:
The idea of getting current needs was not on my mind, but some of these stuck out to me. I thought I'd had all the necessary Calling Card inserts from 2012 Topps, and yet there was a Phils one, yes of general awful person Jonathan Papelbon, still floating around out there? 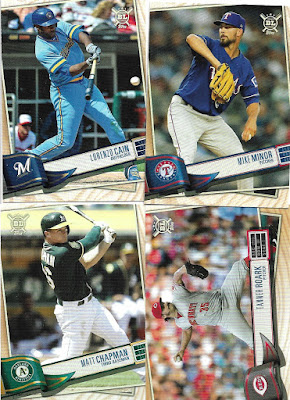 I think I'm gonna be finding 2019 Big League singles I need until the end of time. How did I not have that awesome LoCain throwback?

Some recent GQ and Heritage. Somehow, this is the only Bartolo Colon card in this post. I know.

Three rookies I was surprised to find for 10 cents each. Garcia's gonna be tearing down the NL East in a bit, Matt Manning is one of the many Tigers pitching prospects, and that 2012 Vogey is his XRC, and a zero-year card as he never played any games with the Cubs. He looks odd here. Still big, but odd. 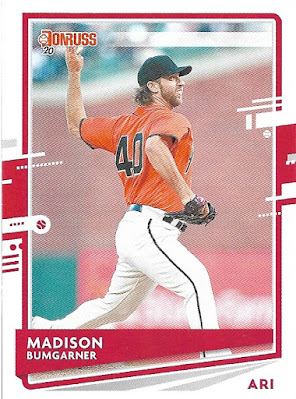 And yes, for the only Panini card in this shipment, here is technically the first Diamondbacks card of Madison Bumgarner.
...I know. He's...yeah. I'll have to get another one from later in the season. 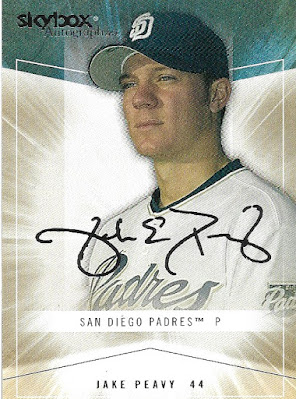 2000s Sets I'm Familiar With:
I got a bunch of 2005 Fleer Autographics back in the day, not as strongly as the 2004 stuff I've mentioned but enough to whet my appetite. So this Peavy, while it was the only one I could find, was enough. 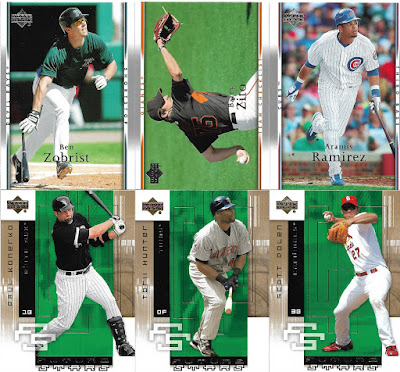 These two UD sets I got several packs of in 2007, but somehow didn't get these. That Rolen should have been in my collection years ago. 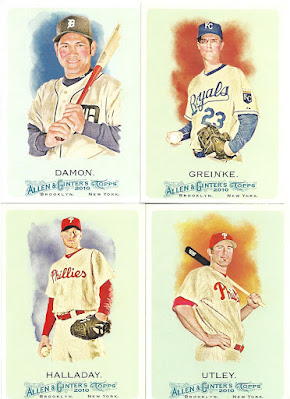 I've been looking around at some A&G singles that I've missed over the years, and they had a few from the 2010 set, which I mostly sat out. That Halladay seemed to be everywhere in 2010, which is why it's criminal that I hadn't gotten it yet. 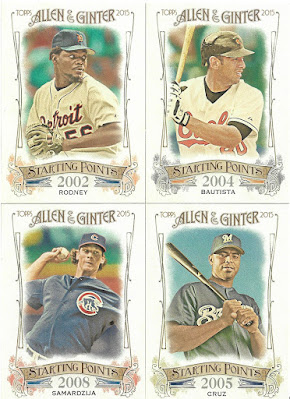 I somehow had missed out on these 2015 A&G Starting Point inserts, which are cool because they mention team stints that Topps doesn't usually go for. Here, we have Jose Bautista on the O's and Nelson Cruz on the Brewers. Weird stuff. Plus, rookie Rodney!

Mid-2000s Stuff:
Yeah, like with most collectors, the mid-2000s is my blindspot, which is why I've slowly been getting more and more mid-2000s semi-premium stuff off of this site, cause it fills lots of needs. All three of these Marlins are from sets I'm not too familiar with. 2005 Artifacts I think was entirely new to me. 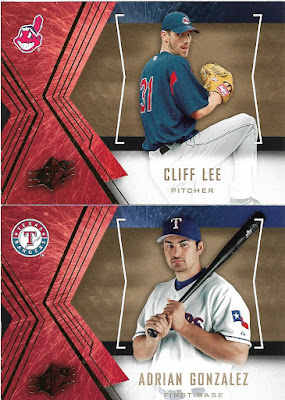 This is 2005 SpX. I have never seen a single card from this set until now. It's not very impressive but there you go. Rangers Gonzalez made this a must-have, and that pre-fame Lee isn't bad either.

2001 Fleer Futures is another one I don't have a great deal of, but I'm always down for a non-Dodger Nomo. Cool-looking set, too.

2004 Leaf Certified Cuts. Striking-ass set, but I don't have much. They scan oddly. That Nomo does look cool, and I'm fine with Phils Wagners every now and then.

2005 Sweet Spot I've been getting a lot of thanks to this site, and these three are the next ones. 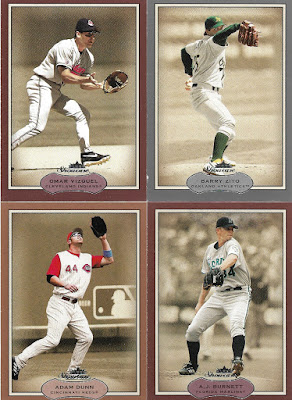 2003 Fleer Showcase, also kinda new to me. Very odd how different this set looks from Showcase's more familiar run from 2004-2006. 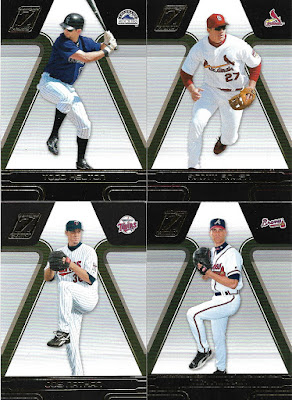 2005 Zenith, favorite of repacks from the 2006-2008 era of retail. Tim Hudson looks mighty new as a Brave. This is a minimal if interesting set. Kinda wonder how this one would have evolved if Playoff had survived past 2005. 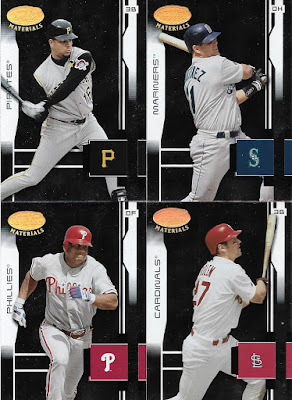 2003 Leaf Certified Materials. Another set that's new to me, though I'm familiar with the run. A 2004 E-Mart is always cool, as is the usual Rolen's and Abreus I've been finding on this site. 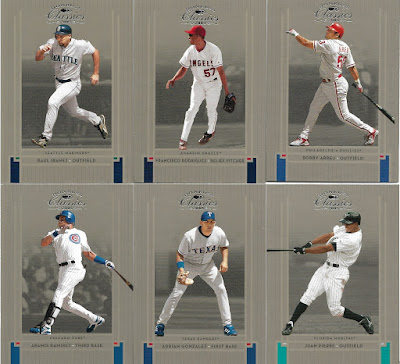 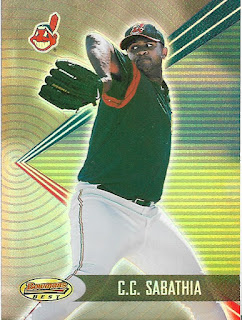 And finally, a 2001 Bowman's Best CC Sabathia. Not quite a rookie, but entirely awesome. 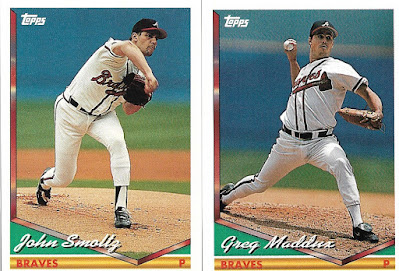 90's Stuff:
These two 94 Topps star cards have evaded me for so long that finding them for 10 cents a pop felt cathartic. I still have some HOF singles from that set left to find, but these two will make things easier. 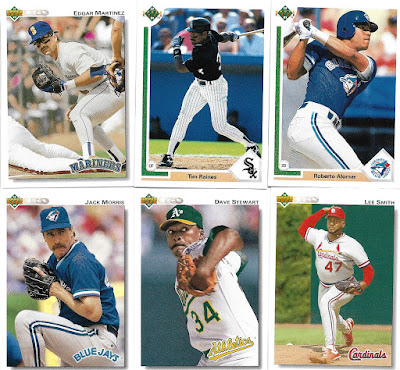 Lofton and McGriff. If these guys didn't pop up in a order post of mine, something may have gone wrong. Plus, it's Giants Lofton, which is relatively rare. 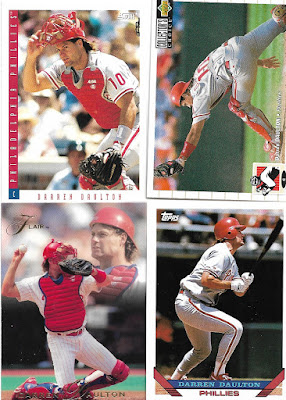 Always down to add some new Dutch cards to the collection. All of these are from 93 and 94, the last great period of his career. 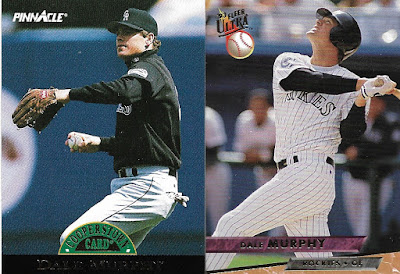 And finally, two 'never in a million years' cards for me- Dale Murphy in Denver. The left is from 1993 Pinnacle's Cooperstown insert set, which at the moment is very ironic, and the one on the right is from 1993 Fleer Ultra. Didn't know either of these existed til I saw them in the catalog, thought he only did a Pacific card in Colorado. Glad to have both of these, as it's an odd final portrait of a Braves legend.
So yeah, pretty satisfying stuff overall. Might go back eventually, they've been doing me well. Might look even deeper, go for even weirder stuff.
Posted by Jordan at 1:03 PM
Labels: baseballcardstore.ca