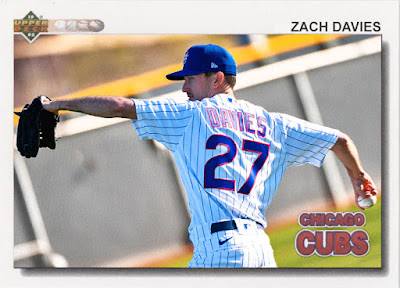 As games begin all over the spring training facilities and the seasons begin to come into scope, I'm very interested to see how the Chicago Cubs shape up. They're one of those teams that could go either way- they could compete, or they could rebuild.

The thing is, they haven't lost too many of the big, formative pieces, honestly. Yu Darvish was a supplemental piece that became an ace last year, same with Jose Quintana. Caratini was a backup, same with Almora. And yes, Kyle Schwarber and Jon Lester are big pieces of the 2016 team, and ironically they both went to the same place, along with Jeremy Jeffress, but they were beginning to wane in the last few seasons.

The core guys that the Cubs have left all seem to have a few more years left in the tank. Kyle Hendricks is still looking at ace material, Anthony Rizzo and Kris Bryant still seem like league-caliber bats, Javier Baez is still one of the most dynamic infield performers in the game, and Jason Heyward is still a solid mid-lineup bat with great defensive ability. And they've still accumulated guys like Ian Happ, Alec Mills, David Bote and Nico Hoerner who can begin to carry more weight this year.

But a lot of the moves that the Cubs made this season do point towards more of a rebuilding year. Joc Pederson will be starting in the outfield this year, after a disappointing year in LA. Jake Arrieta and Trevor Williams, leading rotations in smaller markets last year, are looking at lower-tier rotation spots. Even the backup outfielders, like Cameron Maybin and Jake Marisnick, speak to more of a piecemeal, open-ended strategy.

The only real dynamic, team-lifting pickup the Cubs received this offseason may have been Zach Davies, in exchange for Darvish and Caratini. Davies is coming off of two straight excellent seasons, with only 2018's injury-plagued, disappointing campaign being a sorry spot on a fantastic career resume. He's hit 17 wins before, he's had several strikeout-friendly years, and his only issue is high WHIP. Slotting him in between Hendricks and Mills could prove to be a wise idea, and he could give another underrated, win-friendly season.

But...I'm not sure if it's enough to really make this team a contender against teams like the Cardinals and Brewers this year. They could get a wild card spot, or they could really surprise me and take first, but...I have my concerns about this team.

Coming Tomorrow- One of the guys who left the Cubs. Looks to be starting for an AL team that should be a lot better than they are.