Topps Cards That Should Have Been: 2004 Topps Raul Mondesi 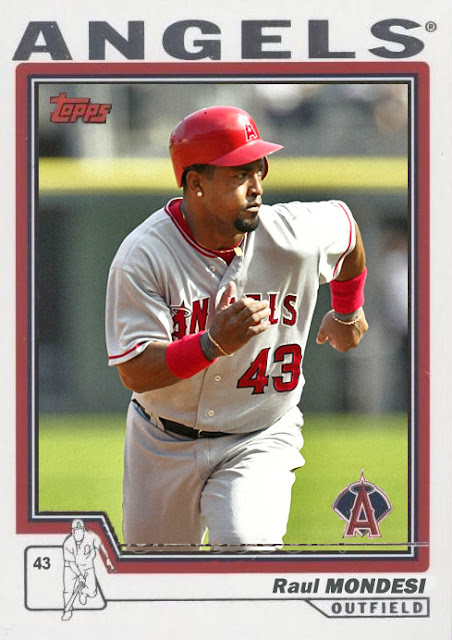 The career of Raul Mondesi is one that most collectors know of...to a degree. Like...Rookie of the Year with the Dodgers in 94, big hitting years for LA and Toronto, lands in New York in 02, then can't stay in one place for the rest of his career.

Topps, to their credit, did document Raul Mondesi's stints on the Yankees, Diamondbacks, Pirates and Braves. But...one slipped through the cracks. The most boring one.

In May, after the Pirates have already released Mondesi after hitting [checks notes] .283 WITH 14 RBIS IN 26 GAMES??? WHY THE HELL WOULD THEY RELEASE THAT? Was he just making the rest of the team look too good???

Jeez. Anyway. The Pirates foolishly release Mondesi, and he signs with the Angels, who...apparently need outfield help? With...Garrett Anderson, Vladimir Guerrero and Jose Guillen starting? This is making less and less sense the further I get into it.

This part does make sense- in 8 games with the Angels, Mondesi hits .118 with only one RBI, a home run. It's a very unspectacular run, and the Angels release him just as quickly as they pick him up. Because he's been released way before Topps' Traded deadline, they just don't put him in the set at all. Figures. They do give him a Braves card in 2005 for some reason, but...maybe they were just being nice.

Labels: 2004, Angels, Raul Mondesi, Topps Cards That Should Have Been