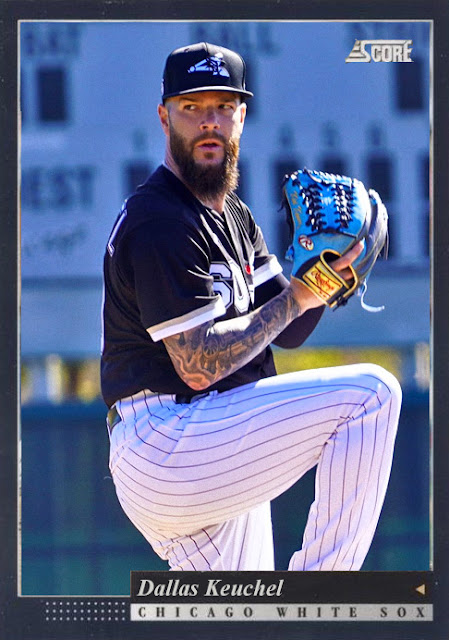 You know that custom card season has returned when this blog is filled with puns that are juuuust pushing it.

Okay, so...as of 2021, the Chicago White Sox are basically back. They have a playoff appearance under their belt, a league-highlight roster and pitching staff, an MVP and a Cy Young winner plus several people who've either come close to our could feasibly win one in the future, the recipient of the highest-selling rookie card of the 2020 season, and two pitching acquisitions that may have put them entirely over the top.

Now...let's examine the chance of failure.

You're dealing with a few people, like Dallas Keuchel, Lance Lynn, Liam Hendriks, Lucas Giolito and Tim Anderson, who have had consecutive fantastic seasons yet have also had seasons in the past where they've struggled. So to assume that the White Sox contend this year is to assume that all five of those players compete exactly as expected. And in all these years of following baseball, I am confident in saying that there is always an unexpected variable that has to be taken into account. If it weren't for unexpected variables, the Yankees would be looking for their third straight title this season.

You also have to factor in injury percentage. If Abreu, Moncada, Anderson, Grandal, Jimenez and Robert are all not only healthy but playing to the best of their ability, you've got a title. But you also have to look at Moncada, who's been peppy but doesn't hit for average, and Grandal, who now has more pressure without the safety net of James McCann behind him. Also, what if the big gun, Luis Robert, gets injured? What if Abreu's 34-ness leads to him breaking down? What if Kopech still isn't ready?

There are so many variables that could tank this team. And yet, if all of said variables click in line, this team could easily win the AL Central and be a major playoff competitor in an AL climate that, honestly, doesn't have many non-Yankee threats looming. If the Rays and Astros are both taking a step back, and the A's are a bit humbler without Hendriks and Semien, the White Sox could be a major player in the AL this year, and a definite favorite to take it all if everything goes the way the sportswriters are thinking it will.

All it takes is for everything to come together for the White Sox. And I kinda hope it does.

Coming Tomorrow- On the other side of Chicago, the closest thing we've had in about a decade to a rebuilding year.