As the material for 2021 customs begins to trickle in, and I reckon some of those will start appearing on here in the next week or so, I still have a backlog of stuff to produce for 2020 Topps Final Edition. What I might start doing is doing Final Edition posts on Mondays and Fridays, cause there's a lot to get through.

Onto the next nine cards. Expect a lot of relievers. 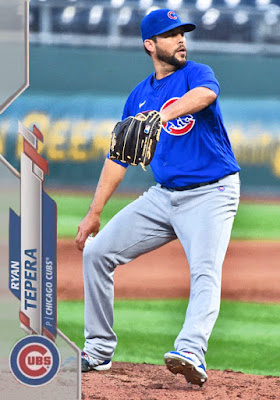 Card #019- Ryan Tepera, Chicago Cubs
Fun fact- due to a tactical error on the part of a sportswriter, Ryan Tepera got exactly one MVP vote last year. It was a foresight by someone trying to vote for Fernando Tatis and missed. Honestly, it's kind of a cool stat, as Ryan Tepera did have a decent enough season in relief for Chicago. In 21 games, he had a 3.92 ERA and 33 strikeouts, and, yes, came 18th in MVP voting. Sadly, Tepera is still a free agent. 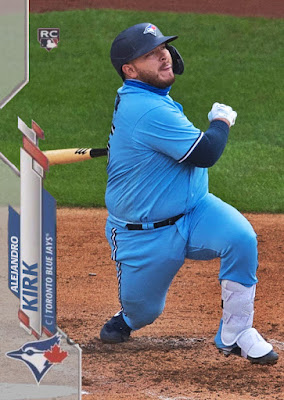 Card #020- Alejandro Kirk, Toronto Blue Jays
Despite the platoon at catcher of Danny Jansen and Reese McGuire that continued in Toronto this year, the Jays still had time to throw rookie Alejandro Kirk into the mix. Kirk, a big, strong, hulking 22-year-old, took a massive swat at the 2021 catching race, and hit .375 in 9 games, including 9 hits and 3 RBIs. Heck, he even had a postseason hit during the Rays series. It'll be interesting to see if the Jays have any use for him this year, as he's clearly a nice asset for any team trying to rebuild. 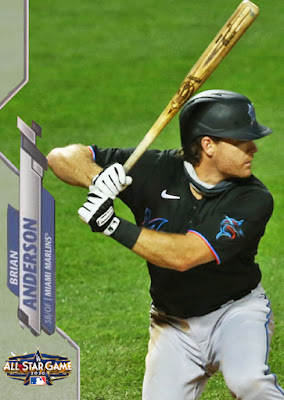 Card #021- Brian Anderson ASG, Miami Marlins
If the 2020 season had gone ahead as planned, Brian Anderson would have been the sole Marlin to make the team, as the big points of success [Starling, Sixto, lapping the Phils] would happen after the midpoint that I'm basing these ASG sims from. He would be a backup, and relieve Manny Machado at third as well as getting in an at-bat. With Anderson's strong season, making him just as crucial to the Marlins core as other infielders like Miguel Rojas, it would have been a well-deserved nomination. 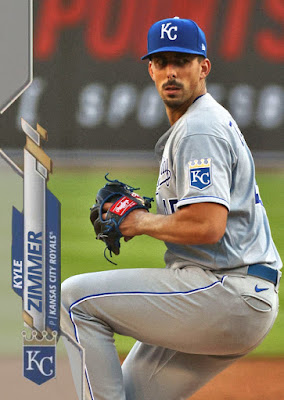 Card #022- Kyle Zimmer, Kansas City Royals
The Royals, despite having another okay-at-best year in the AL Central, were able to sneakily build a relatively good bullpen without anyone looking. Kyle Zimmer was one of the assets that KC was able to build off of, with a 1.57 ERA in 16 games, with 22 Ks. Zimmer and the other up-and-comers combined with veterans like Trevor Rosenthal and Greg Holland to provide some bullpen strength that deserved a better team. 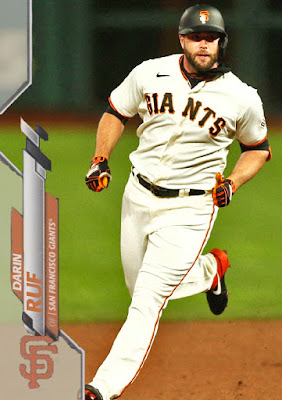 Card #023- Darin Ruf, San Francisco Giants
It's always interesting when a player goes to international markets and returns to the US as a star. It hurts, though, when said player came up with your team. Darin Ruf was a Phillies prospect, was blocked behind Ryan Howard and struggled in the majors, and only found contact success when playing with the Samsung Lions from 2017-2019, hitting 30 home runs in each and finding the success he SHOULD HAVE in Philly. Then, he signs a deal with the Giants as a bench option in 2020, and gets off to a hot start, and hits .276 in 40 games. Yes, only 5 homers, but 18 RBIs. He wasn't starting every day, because...I mean, Yaz-Dubon-Dickerson is a strong enough outfield. But he was a crucial bench bat that helped a postseason effort, started at DH more often than not, and has a chance of factoring into the 2021 lineup. So he's finding success in the majors...with a team that isn't Philly, because of course. 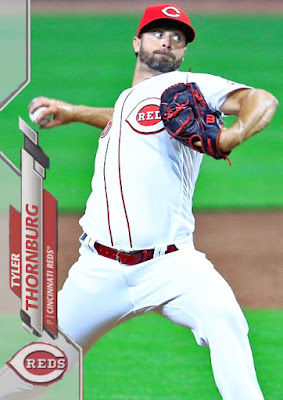 Card #024- Tyler Thornburg, Cincinnati Reds
Before this season, Tyler Thornburg was best known for being traded for Travis Shaw [and Mauricio Dubon] and immediately getting injured for Boston. This was his first productive season since then, as he only had 7 games but still had a 3.86 ERA with 10 Ks. He's currently a free agent, but as a relief specialist he still has a lot of use left. 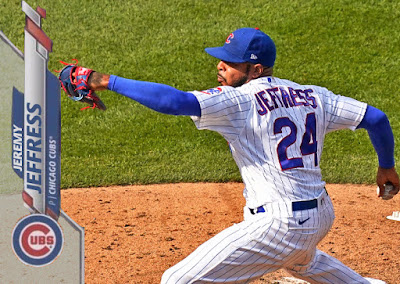 Card #025- Jeremy Jeffress, Chicago Cubs
This was one of my most disappointing omissions from the initial Topps Update set. Jeremy Jeffress had a Brewers card in flagship, he was on the Cubs for Spring Training, and yet Topps decided that Jharel Cotton and Josh Phegley needed Update issues instead. Jeremy Jeffress had one of the best seasons of any reliever in 2020. In 22 games, he hit a 1.54 ERA, then managed to steal the closing gig away from a struggling Craig Kimbrel and had 8 saves. The Nationals just picked him up for 2020, probably for setup work, and I hope he keeps it up. 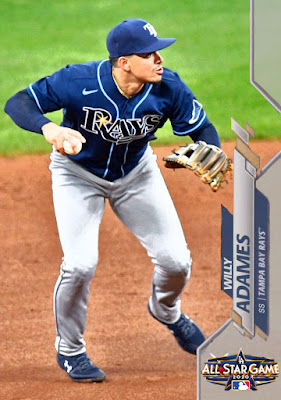 Card #026: Willy Adames, Tampa Bay Rays
Like Anderson, Willy Adames wouldn't be used as a starter for the potential 2020 All Star Game, but he'd be a decent substitute at shortstop. With the season Adames had, especially with his surging Rays, he would have deserved an ASG nod. Considering that there's a major SS prospect waiting to come up in Tampa, I'm not sure if Adames will even get an ASG nod as a Ray at this point, but it'd have be nice if he got one in this season. 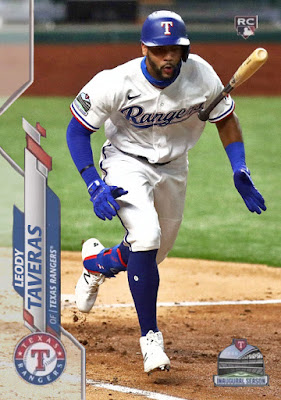 #027- Leody Taveras RC, Texas Rangers
One of the many Rangers prospects that saw playing time in 2020, Leody Taveras, whose cousin Willy also found success in Texan markets, had a 33-game call-up with the Rangers, hit .227 with 8 steals and 27 hits, and had a modest enough audition for the outfield spot next year, which he will likely get. As the Rangers reform back into a rebuilding contender, it'll be interesting to see how speedy contact guys like Taveras and Robinson Tejeda factor into things.