First Custom of the Year, 2021 Edition 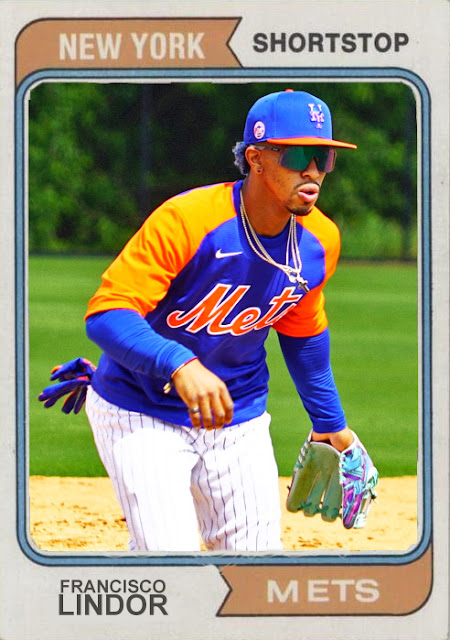 At last, some culture.

Giving someone the designation of the first custom card of the year can either be a blessing or a curse at this rate. In fact, let's go down the line and see who's qualified for the first of the year since I started doing these from the start of the year in 2010.

2010- Roy Halladay, who'd just signed with the Phillies and was poised for a huge year. He had said huge year, and won a Cy Young along with pitching two no-hitters. I got it right, right off the bat.

2011- Zack Greinke, Milwaukee Brewers. Another recent traded player in a new team, this one seeming less like a good fit due to Greinke's nervous disposition on said custom. Greinke would take another 2 years before landing in a good market for his abilities, LA.

2012- Yu Darvish, Texas Rangers. The big rookie from overseas. Darvish did pretty well his rookie year, and got a great deal of the hype that he'd deserved, but wouldn't become a fixture for a few more years.

2013- Michael Bourn, Cleveland Indians. This was my first huge miss. I was thinking Bourn and Swisher would lead to great things in Cleveland, when in reality neither especially made a great impact there.

2014- Robinson Cano, Seattle Mariners. Yeah, he would have a nice season upon arriving in Seattle, but after a few more he'd overstay his welcome thanks to some illegal drug use suspensions.

2015- Matt Kemp, San Diego Padres. Another miss. Yes, this was a big deal, and one of the many signs of the shift in power to San Diego, but like Bourn, it was a misnomer, and Kemp would be dealt to Atlanta as teams would play hot potato with his cripplingly large contract.

2016- Jason Heyward, Chicago Cubs. I'd say this was a valid choice, as J-Hey, while not 2015-good, would be one of the many Cubs hoisting World Series rings in October that year.

2017- Buster Posey, San Francisco Giants. A rare year where I just started off with an established player who didn't change teams just cause I liked the photo. Posey had a pretty good year, as well.

2018- Shohei Ohtani, Los Angeles Angels. Who else was I gonna do, anyway? Ohtani would snag Rookie of the Year from the jaws of the Yankees, so this was another solid pick.

2019- Ichiro Suzuki, Seattle Mariners. This was a weird case, because it took me a month or so to figure out how customs were gonna work due to my photo source crapping out on me. So it took until March for me to do one, and it was of immediately-retiring Ichiro. More of a legacy pick than anything.

2020- Gerrit Cole, New York Yankees. Another pretty valid pick, as Cole's first season in the Bronx was yet another strong one.

And now here we are. Francisco Lindor in Queens is the first offering of 2021. I have no idea if Lindor will have the season that we're all thinking he will, but if he does, the Mets are gonna be up to some big things this year. The NL East is gonna be crowded, but the Mets are being seen as a favorite due to how rejuvenated they feel, and due to their wise offseason moves.

Right now I think that this is a good choice, but talk to me in a year and we'll see how I did.