As hinted on Monday, I'm expanding the rollouts for Final Edition to a monday-and-friday basis, cause I wanna get as much of these out as possible before this blog becomes inundated with 2021 customs and posts complaining about why I haven't gotten any retail product yet.

So, here now are the next 9 cards in the set. Pretty standard bunch, these. 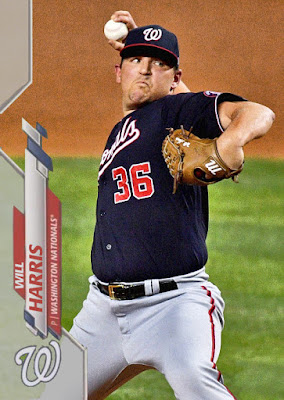 Card #028- Will Harris, Washington Nationals
After 5 years of exemplary relief work for the Houston Astros, Will Harris made a move to Washington on a decent contract. It was a move that, for some reason, went unnoticed by Topps, but considering how nonchalant they are about most relievers, I'm not exactly shocked. Harris had a 3.06 ERA in 20 appearance for the Nats, including 21 strikeouts, and was a bright light in a saggy, energy-lacking year for Washington. Hopefully with a rejuvenated team, and more bullpen support in the form of Jeremy Jeffress and Brad Hand, he'll be able to accomplish a lot more. 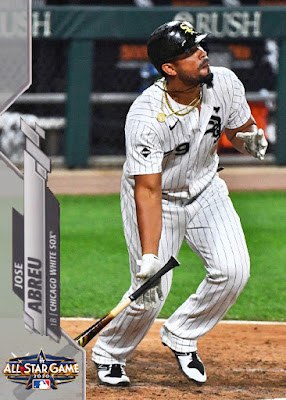 Card #029- Jose Abreu ASG, Chicago White Sox
Unsurprisingly, Abreu would have been the starting 1st baseman for the AL All Star team. It would have been his fourth overall appearance and his second career start, and he would have gotten a TON of votes for it. I'm genuinely happy that Abreu is still delivering at the plate, and is still a steady lineup presence for Chicago, and I hope he keeps up the fantastic work. Also, by proportion, if the 2020 season had been all 162 games, Abreu's 19 home runs would have become 51. Which would have cemented that MVP, I think. [Also, by proportion, Voit would have had 59, so man if math was as accurate as real life, we'd be in business] 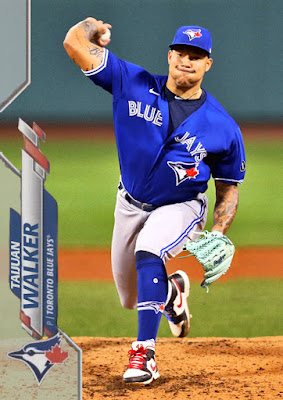 Card #030- Taijuan Walker, Toronto Blue Jays
After an impressive comeback as a member of the Seattle Mariners, Taijuan Walker was dealt to a contender at the deadline, in this case the rotation-desperate Blue Jays. Of all the Jays' August starter acquisitions, including Robbie Ray and Ross Stripling, Walker had the absolute best second-half numbers, with a 1.37 ERA and 25 Ks in 6 games. If the Jays-Rays series had gone to 3 games, he would have gotten the start, and lord knows how that would have gone for Tampa, but he boosted his stock in a month's time, and got a 2-year deal in Queens out of it. 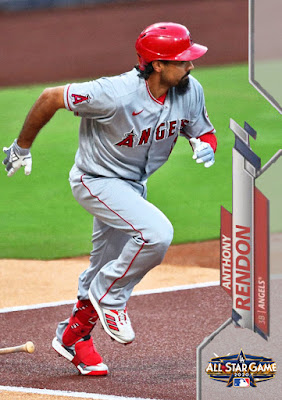 Card #031- Anthony Rendon ASG, Los Angeles Angels
Unlike Abreu, Anthony Rendon would have to settle for a reserve spot on the ASG roster, thanks to the exploits of one Jose Ramirez of Cleveland. While Ramirez came out swinging like never before, Rendon's season took more time to gestate, before leading to a 2.3 WAR season with a .286 average and 31 RBIs, definitely career-caliber numbers for the former National. It'll be interesting to see how he does in a full season, especially with a slightly-fine-tuned Angels roster. 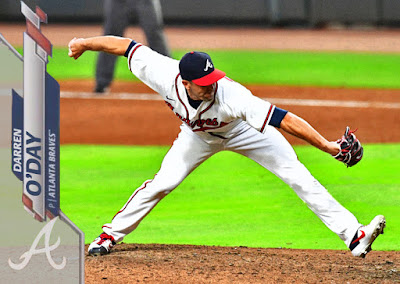 Card #032- Darren O'Day, Atlanta Braves
After gestating in Atlanta for a few years following his sharp days as Baltimore's mighty set-up man, Darren O'Day finally found himself on an electric bullpen unit, and a charter member at that. In 19 appearances, O'Day flashed a 1.10 ERA, with 4 wins and 22 Ks. He'd go scoreless in the postseason up until a nasty run-in with the Dodgers' offense. The Yankees just signed O'Day, so hopefully more similar material is on the way. 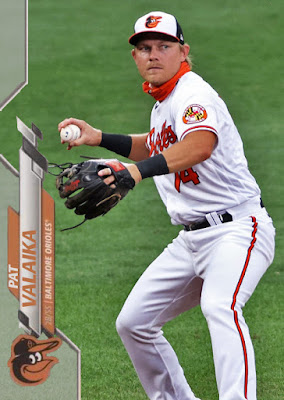 Card #033- Pat Valaika, Baltimore Orioles
After being cut loose by the Colorado Rockies in favor of other infielders like Garrett Hampson and Ryan McMahon, Pat Valaika made it to the last oasis for failed infielders...the Baltimore Orioles. He surprisingly didn't do too badly, hitting .277 in 52 games, with 16 RBIs and 8 homers, but I feel as though he's not going to be relied upon as a major position player as the new kids begin to make themselves known in Baltimore. Perhaps a career as a super-ute is in the cards for him? 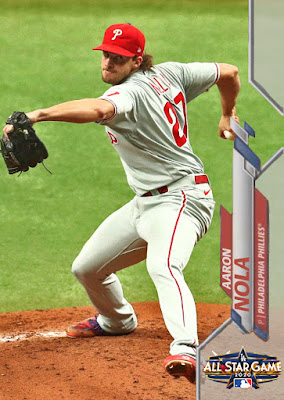 Card #034- Aaron Nola ASG, Philadelphia Phillies
The masses erupted in cries of slander after Zach Wheeler was removed from the ASG roster in order to make his Sunday start, but the mood rose once Aaron Nola, himself an unworthy snub, agreed to take Wheeler's place. Nola would have been an insanely valid ASG pick, and this would have been his second ASG nod...though that is far too few a number considering how excellent he's been in Philly. Considering that Nola is only locked up for a few more years, I sincerely hope he continues his mound dominance for us. 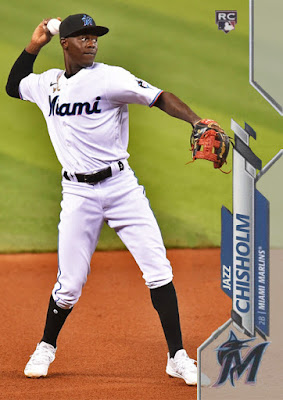 Card #035- Jazz Chisholm, Miami Marlins
Jazz Chisholm entered the majors with a lot on his shoulders to begin with, being the sole prospect traded from Phoenix in exchange for current staff ace Zac Gallen. As Gallen lit up the majors, Chisholm needed to establish that he could similarly get it done in the infield. While his fielding numbers were decent, his average fell below the Mendoza line, and his playing time faltered due to his one-dimensionality. I really hope he pulls it together in 2021, as the Marlins are still trying to figure out a few details of their infield situation. 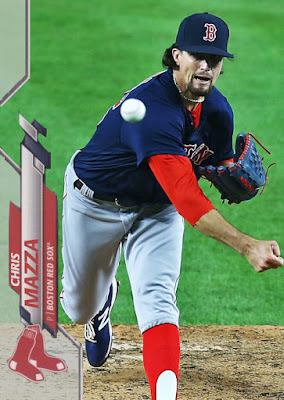 Card #036- Chris Mazza, Boston Red Sox
Mazza was one of the many casualties of Boston's torrid pitching staff in 2020. After being waived by Boston from the Mets, Mazza was slotted in as a potential starting option following injuries to Chris Sale and Eduardo Rodriguez. Mazza's season was...alright. I mean, he had a 4.80 ERA in 9 games despite a massive WHIP, but I suppose he didn't get clobbered as much as other Boston starting options. The Sox, for his efforts, traded him to Tampa this year, so maybe he'll click in a more pitching-friendly environment.

I'll post the next 9 on Monday. Nice run of relievers in this one.