Last monday, I debuted the first 9 cards in the 2020 Topps Final Edition set, righting the wrongs of Topps' production deadlines. This week, we get the next nine cards in the set, featuring some very interesting cases that I wanted to showcase with this project. 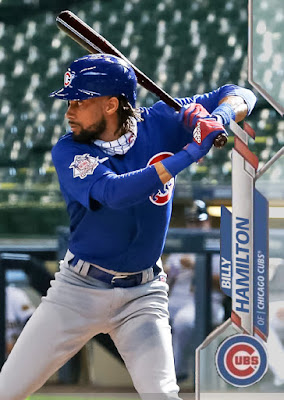 Card #010: Billy Hamilton, Chicago Cubs
Since leaving the Reds, Hamilton has played for five teams, and has struggled to return to the consistency and speed of his early seasons. The Cubs took a chance on him for the stretch, and Hamilton responded with a .300 average, 3 steals, and a brief postseason appearance as a pinch runner against Miami. Hamilton is yet-unsigned, but is still a valuable asset for any teams struggling with speed. 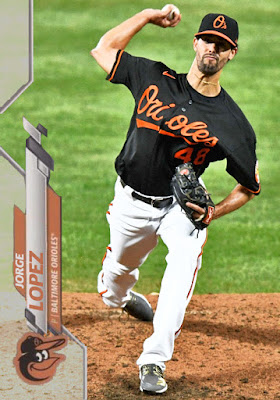 Card #011: Jorge Lopez, Baltimore Orioles
After a breakout season in Kansas City in 2019, Lopez' abilities as a starter were put to the test when Baltimore selected him off waivers a day or so into the season. In 9 games, Lopez hit a 6.38 ERA while striking out 28, being a lower-tier starting option for the slowly-rebuilding O's. Lopez will most likely return to his roots as a bullpen piece for 2021. 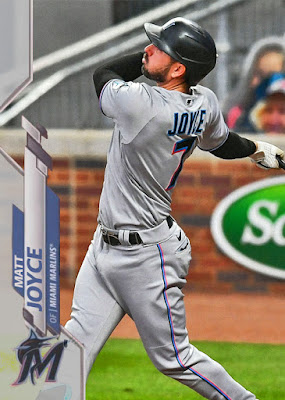 Card #012: Matt Joyce, Miami Marlins
Of late, Matt Joyce has become one of the most underrated and useful utility outfielders in baseball, making surprising seasons happen out of nowhere in Oakland, Atlanta, and now Miami. In 46 games, Joyce hit .252 with 14 RBIs, and became a useful outfield piece after Marte got injured. He'll be trying out for an OF gig in Philly this season. 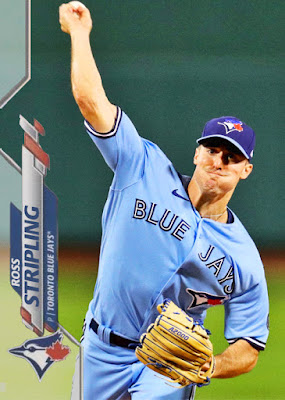 Card #013: Ross Stripling, Toronto Blue Jays
Ross Stripling was one of the few casualties of the 2020 Dodgers, the one piece of the championship team that was traded right before the World Series win. Here, it was an odd move, a contender trading a starter to another contender, even a decent one like Stripling, but as Stripling's 5.61 ERA forewarned, the Dodgers needed to clear out some rotation space. So the Blue Jays took him on, started him for a few games, where he went for a 6.32 ERA and was later shifted to the bullpen, where he may start the season for Toronto this year. 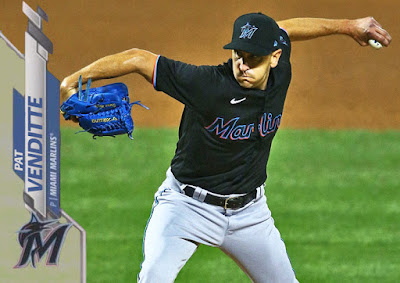 Card #014: Pat Venditte, Miami Marlins
I couldn't resist making a Pat Venditte card. Of all the players that Topps doesn't make cards of year after year, Venditte might be the most sad but predictable one, the switch-pitcher that always manages to show up somewhere for a few innings. This year he submerged in Miami, and was scoreless in 3 games before an injury sidelined him for the rest of the season. Considering the 'we'll try anything' approach of the Miami bullpen this year, it was a sad loss but one that could be remedied with another unsung hero. 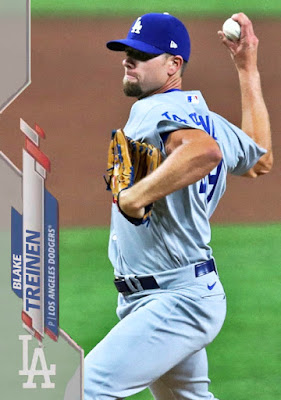 Card #015: Blake Treinen, Los Angeles Dodgers
To me, this was one of Topps' biggest omissions in 2020. Yes, they made a card of Treinen for flagship back in Oakland, but he was traded and pictured as a Dodger before the start of the season, and could have easily been included in 2020 Update. Yet he wasn't. Considering Treinen's improved season, it seems a bit heartless. Yes, Treinen was coming off a down 2019, but he could have used a new-uniform release. Treinen had a 3.86 ERA as a Dodger, with 22 Ks, 31 if you include the 9 postseason Ks. He'll be back with LA for 2021, and looking for similar results. 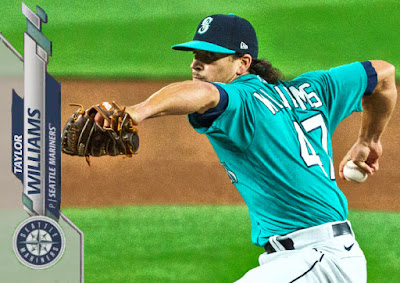 Card #016- Taylor Williams, Seattle Mariners
One of the early-season relief options that Seattle was thankful for was Taylor Williams, who they'd got from Milwaukee the season before. Williams, in 14 games, had 6 saves, albeit with a 5.93 ERA. He was up against teams that were better than him, and his ERA suffered, but he was still a nice enough relief option to get San Diego's attention, as he'd be included in the Austin Nola trade. He'd only pitch one game for SD before being sidelined with an injury for the remainder of a season. 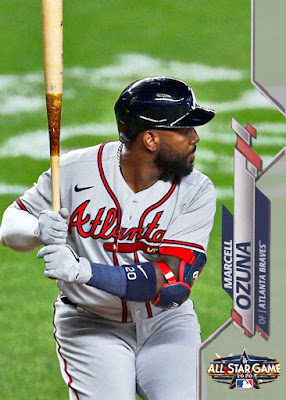 Card #017, Marcell Ozuna ASG, Atlanta Braves
Despite the OF credit, Marcell Ozuna would be the starting DH for the NL team in the 2020 All Star Game, had it happened at all. Ozuna's power-heavy and hard-hitting attributes made him a league-wide talent in 2020, and made it clear to the Braves that they needed to keep him around for the foreseeable future. 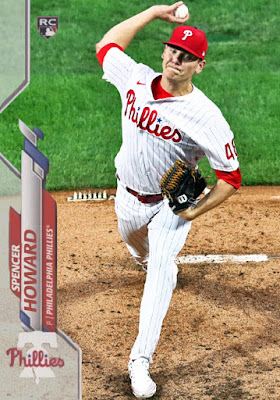 Card #018: Spencer Howard RC, Philadelphia Phillies
One of the Phillies' many call-ups in 2020 was their pitching prospect Spencer Howard, who had been delivering fine numbers in the minors. Unfortunately, Howard may not have been ready for prime time. In 6 games, he had a 5.92 ERA with a too-high WHIP, and only added to the Phils' pitching woes rather than saving things. Hopefully in 2021 either he'll have more time in the minors to hone things or he'll be back in the majors ready for action.
Next monday, one of the reasons for me wanting to do this set in the first place is in the next nine.
Posted by Jordan at 2:31 PM