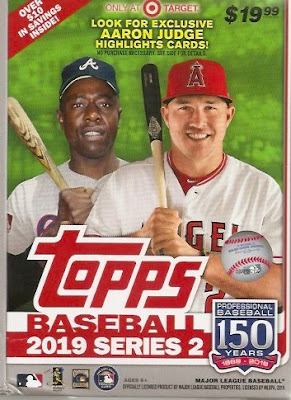 I remember back in the early days of card-blogging, it was a big deal to get a new product first and scan it, so that everybody could see what it looked like, or so that I could get a glimpse of what it looked like. I'm not sure if the blogosphere is still like that.

So anyway, here's 2019 Topps Series 2. You know the drill. I think they changed the pack configuration in blasters, as there's 14 cards per pack, and 7 cards per box. You shirking me out of those extra 2 cards per blaster, Topps? You really testing me?

Also, since every blaster still comes with a commemorative patch card that doesn't mean anything: Here's one of Donnie Baseball. Thrilling. 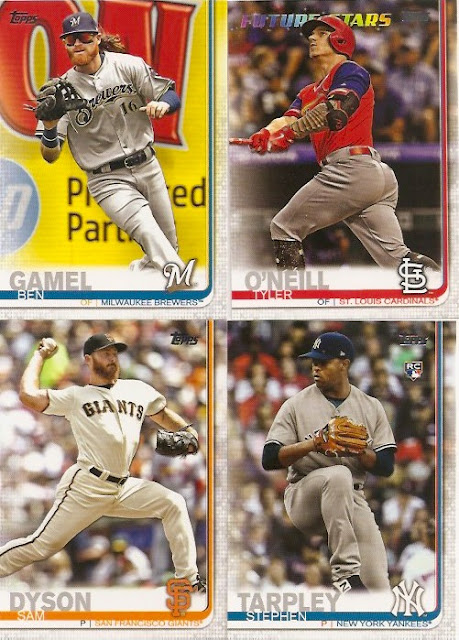 Pack 1- Standard uptick in photo quality with Series 2, as we actually get shots of people in new uniforms, like Ben Gamel, and under-the-radar rookies like Stephen Tarpley, who...I *THINK* is still with the Yankees? You get a prospect like that and you have to wonder whether or not we've traded him away.

Some landscapes. These stadium shots are beautiful. 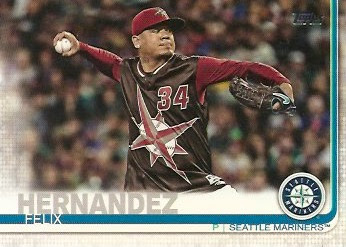 I couldn't have done this better if I tried. My first pack of my first blaster of Topps Series 2, and I not only pull a short print, but I pull one of the only short prints I'd been interested in pulling.

This is a Felix Hernandez card, but it's from last year's Turn Forward the Clock promotion at Safeco Field, to commemorate the awesomely 90s faux-backs the Ms wore in the late 90s. This is incredible, and I'm glad I pulled it. 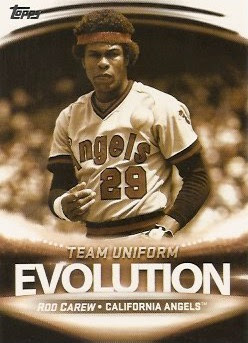 Also, right on Felix's heels, an ACTUAL GOOD INSERT OUT OF TOPPS.

This is a Uniform Evolution insert for the Angels. On the front side is Rod Carew sporting some 80s Angels unis, and on the back side is Mike Trout sporting some modern Angels duds. I could have done a little more with the execution, but it's an insanely smart insert idea. Well done! 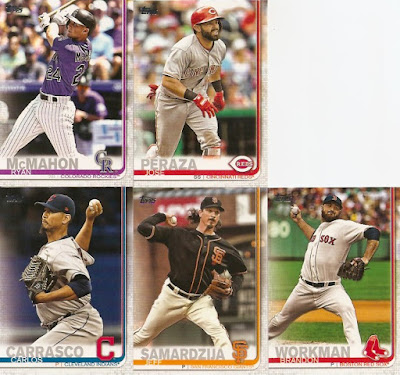 And some more base. Relatively standard stuff, though the background of Carrasco's is pretty cool. 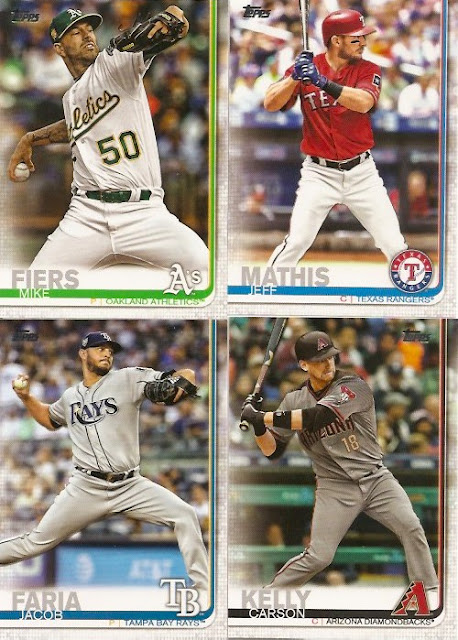 Pack 2- Commons, but I like Fiers as a pitcher, and Carson Kelly is starting a ton of games in Arizona. 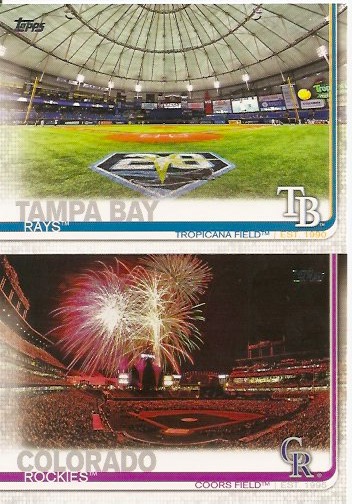 Sta. Di. And I can't emphasize this enough, Ums.

That Coors Field shot is frigging awesome, though. 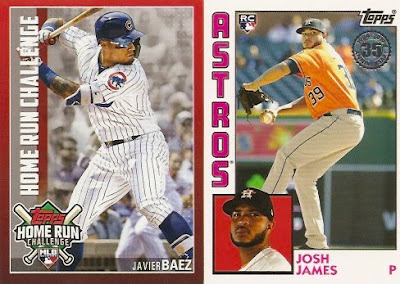 You may recognize these inserts from Series 1. Javy's is a Home Run Challenge, which should do well seeing as this is Javier Baez. Our 84T insert is of Josh James, a Houston farmhand who's yet to really make his mark on that pitching staff. Should happen soon, though. 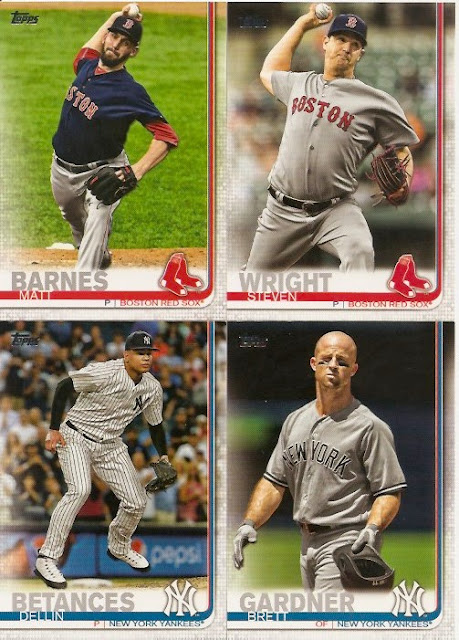 Heroes and villains. I love the Betances shot. And good to see Gardy in a good mood. 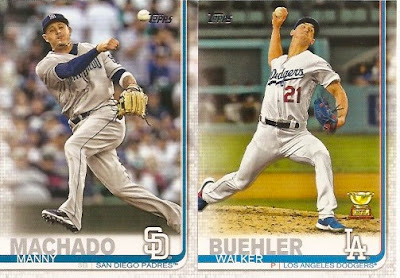 Lo and behold, our first official Topps issue of Manny Machado on the Padres, plus a cool Walker Buehler card. 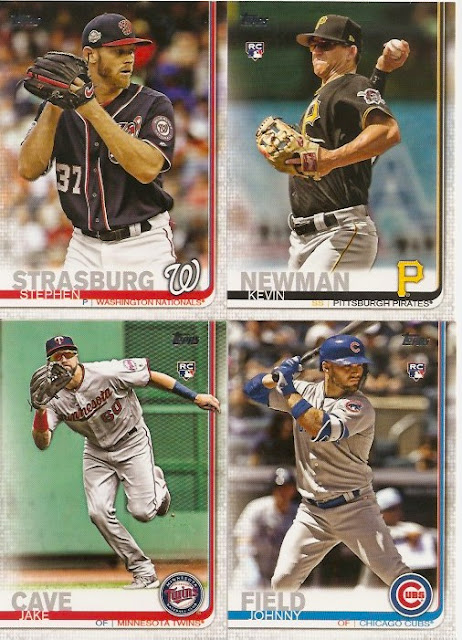 Pack 3-
Rookies and Stras. Kevin Newman is having the best year of the three. Jake Cave's rookie year was technically last year, but Topps is catching up. Johnny Field may not even still be with the Cubs, I have to check.

Some fantastic horizontal shots all-around. Pedroia's may be his last Topps issue? Not sure if he'll be back in 2020, but I'm rooting for him. And Quinn's gonna be fantastic ones he get back to the Phils lineup. 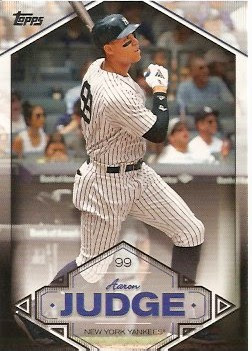 Another Target-exclusive Aaron Judge insert. Thank God I'm a Yankees fan, or else I'd be pissed about these. 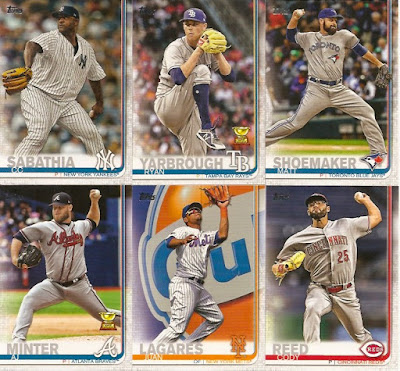 Some commons. CC's is the biggest star for me, but lots of relievers and also rans. I hope Matt Shoemaker gets back to 100% next year. 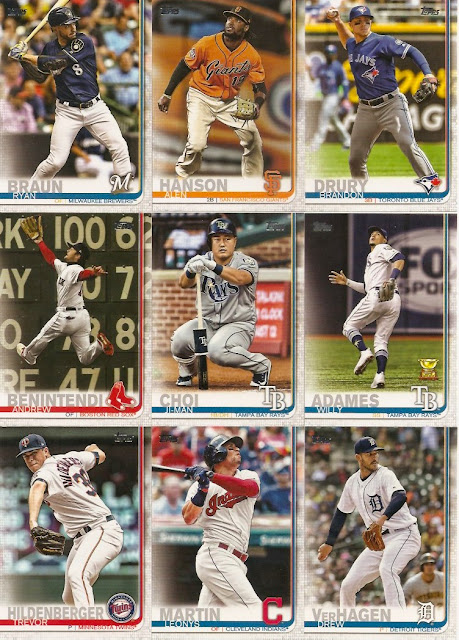 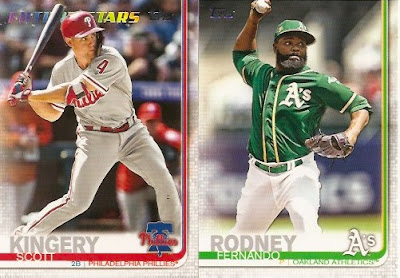 Two sentimental favorites from the base: Kingery because of how well he's playing in place of Cutch, and Rodney for being one of the most well-traveled closers of our generation.

Great horizontal shots all around. I don't like this insert set, though. It's very wordy, very Panini-y. Why tell when you can show? 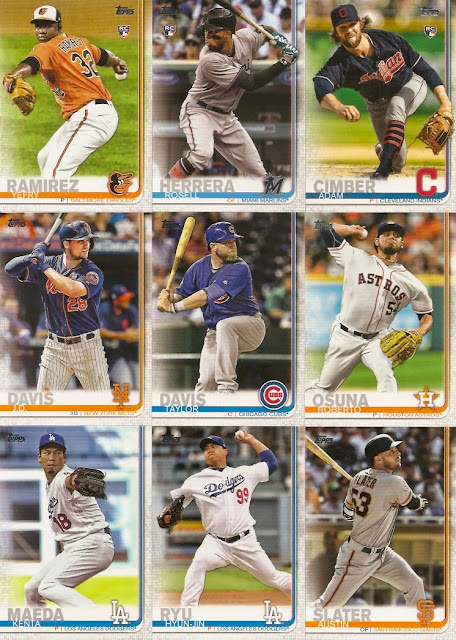 Pack 5- Base stuff. Ryu's is the best 'star' card in here, though the Adam Cimber shot is my favorite. 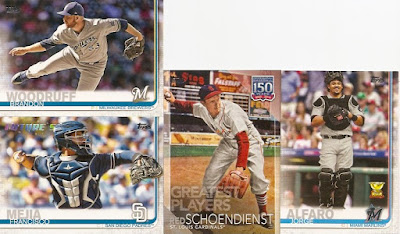 Love both Woodruff's and Mejia's photo, especially the cut-out. Alfaro will always be a favorite for his service to Philly. And it's always a treat to get an insert of Red Schoendienst.

And here's where my luck starts to get ridiculous: 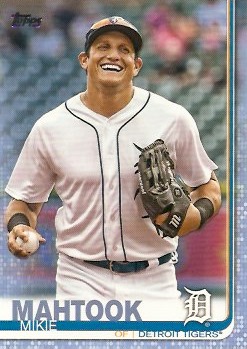 This is a card of Mikie Mahtook. Which is all well and good. But this is a Father's Day blue parallel.

This is a card...numbered to 50...which is a Father's Day parallel.

I bought this box...ON FATHER'S DAY.

Where the hell is Rod Serling? This is too crazy. I'm not supposed to have this kind of luck with retail. First I pull the only short print I wanted, and now I pull a /50 parallel on the exact holiday it's commemorating.

Pack 6-
A trio of youthful players. Renfroe's hot as hell right now. Kiner-Falefa is not. 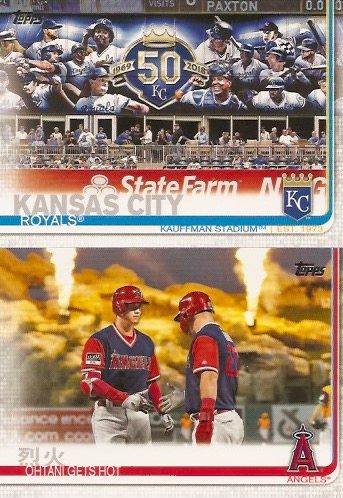 LOVE that Royals TC.
And that Ohtani might be one of my favorites of the year. From the photography to the fire to the lettering. I love it all.

I threw in Thames because I love that throwback, but that Naquin is a shiny parallel.
Also...I will NEVER say no to a new Bo Jackson insert. This one looks considerably awesome, too. 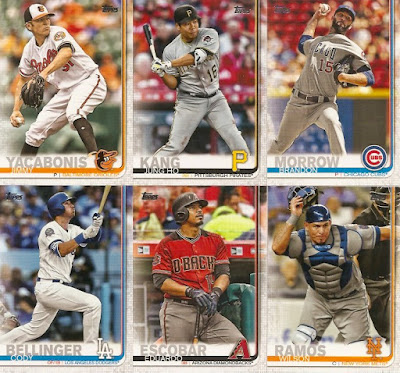 Some final base cards, featuring an entire row of awesomely hot players. Ramos' is sadly an airbrush, though. I love Escobar's shot. 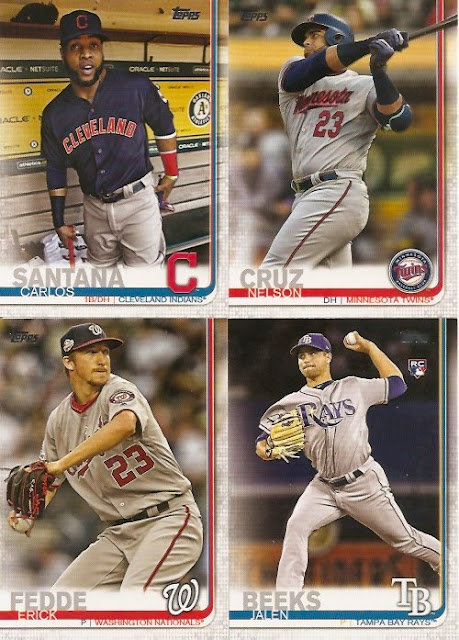 Pack 7- I love that Santana card, and I love that Nelson Cruz has an updated base card. Good stuff. 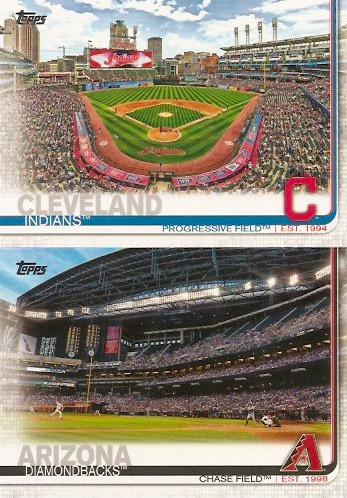 BEAUTIFUL. I do love these team cards this year. 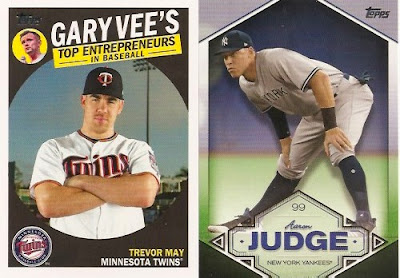 Not wild about giving Gary Vee his own insert set. Still, I'm fine with more Aaron Judge, though. 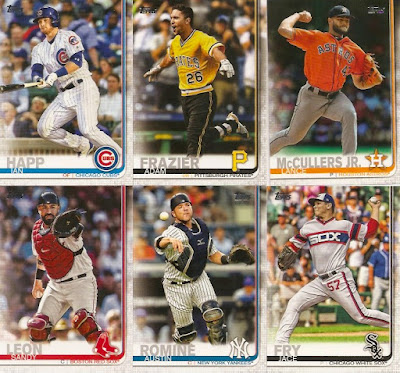 Some last base cards. Both Leon's and Ro's are awesome, I love the throwbacks on Fry and Frazier, and...I just like this set.

I also bought two rack-packs of this set, but...they were both absolutely identical as far as base cards were concerned. Damn retail collation.

Still, I'm liking Series 2, as this set has cemented my admiration for the flagship set this year. Might not be a bit til I buy more, as I don't wanna pull the exact same guys.
Posted by Jordan at 5:45 PM