YOU Try and Stop Matt Chapman 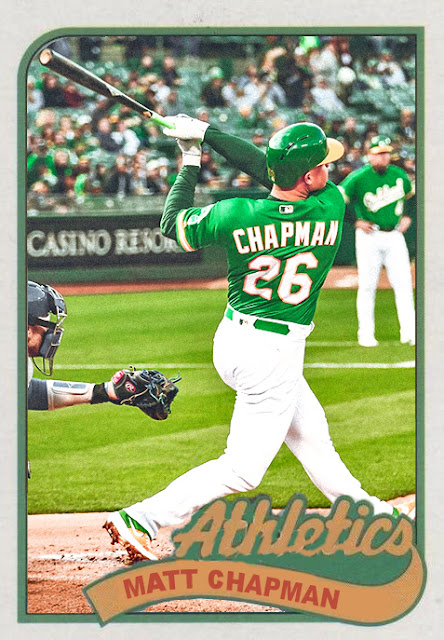 It's impossible. Dude had an 8.2 WAR last year, and he's still frigging going.

And it's weird, because he kind of came out of nowhere. I don't think Matt Chapman was one of those highly-touted prospects where everyone in Oakland was like 'shit, when's he gonna get here?'. I mean, the last one of those they had was Dustin Fowler, and look how he turned out.

Chapman is the kind of everyman leader type that Oakland needed. He's a strong third baseman, stronger even than Donaldson, he's the first callup of many important ones for this team, he's yet to have a bad season, and he's yet to have a substantial injury. Oh yeah, and he also hits .275 every year with 20+ home runs. The Goldschmidt comparisons should be coming very soon, except Goldschmidt only now has an opposite corner as good as Matt Olson, who's been there with Chapman all along.

And while the A's machine has slowed down slightly in the past few weeks, they've definitely weaseled their way into the race after a slow start. A ton of fun breakouts are happening here, like Frankie Montas, Ramon Laureano, Josh Phegley and Chris Bassitt. Hell, the insane Australian relieving abilities of Liam Hendriks have been a fun surprise in the last month or so. But again, this team's problem once again is that it's very streaky, and that it loses momentum very quickly. Which is why I worry that this A's team could get lost in the shuffle if they have too many unlucky stretches.

At the very least, Matt Chapman should be sticking around for a while, so they'll still have a league talent at their disposal.

Coming Tomorrow- Just when you're paying too much attention to Machado and Hosmer, this guy'll crack one over the stands.
Posted by Jordan at 9:47 PM