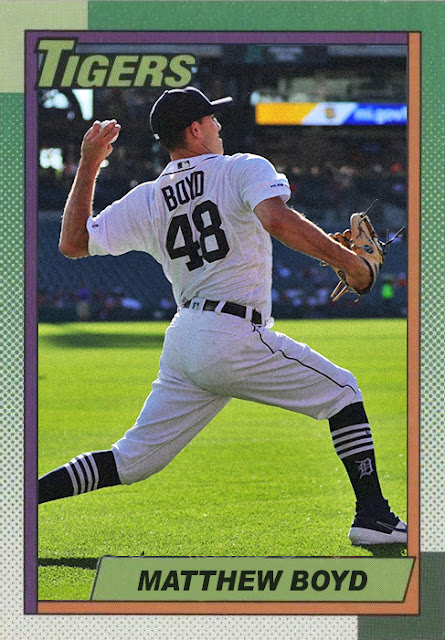 Right. So the reason why it's so tough to write posts about the Tigers is not that they're a bad team. That I can work with. The Marlins and Reds are bad teams and I love writing about them. The Tigers, though...are not a bad team that has shit going on in the distance. Like, the Marlins will be tanking, and out of nowhere they'll just bring up Jordan Yamamoto and go 'see? see this guy? we have this guy? we could be GOOD ONE DAY with this guy'

And at the same time they have like Lewis Brinson who is essentially a pitcher at this point with how shitty he is at the plate.

The Tigers have none of that. They don't do the thing where they bring someone up for a week and go 'we're gonna see more of him next year'. They just soldier on with the mess of a roster they've been working with.

I mean...when your idea of a lineup core is Christin Stewart, JaCoby Jones, Ronny Rodriguez and Niko Goodrum, you're in for a long year. And that's exactly what this has been so far. Nothing has been working for the Tigers, not even Miguel Cabrera as DH. The guys they've been bringing up from the minors aren't doing anything, and the lineup rarely scores runs. So...not only are they not winning many games, but the losses are blowouts.

I don't even know if it's really worth gutting this team at the deadline. What, how many good years does Nicholas Castellanos have left? Is Gordon Beckham the August steal of this team?

Or will they fixate on the pitching, because...hey, at least that bit's working. Will the contenders descend on Matt Boyd like a flock of vultures? Will Matt Boyd be a worthy starter for a dark horse contender, or just...for the Phillies or something? Boyd has been doing a bang-up job so far, with 118 strikeouts and a 3.61 ERA, and would be a good tool for any team other than Detroit for the last half. And without Boyd, they'd still have Spencer Turnbull, Daniel Norris, and the patient wait for Matt Moore to return from the DL.

I wish I had good things to say about this team, because it'd make writing about them every few weeks slightly enjoyable. But there's barely anything good about this Tigers team. And I don't know if it's gonna get any better.

(Update: Future historians will note that this post was written on the exact same day that Riley Greene fell a triple short of a cycle in his MiLB debut for the GCL Tigers. I sincerely hope future historians enjoy irony and bitterness)

Coming Tonight: Part of me thinks he wishes he was in LA again right now, but...he's out of the spotlight, and he's without the pressure, so...maybe he's good where he is.
Posted by Jordan at 11:26 AM