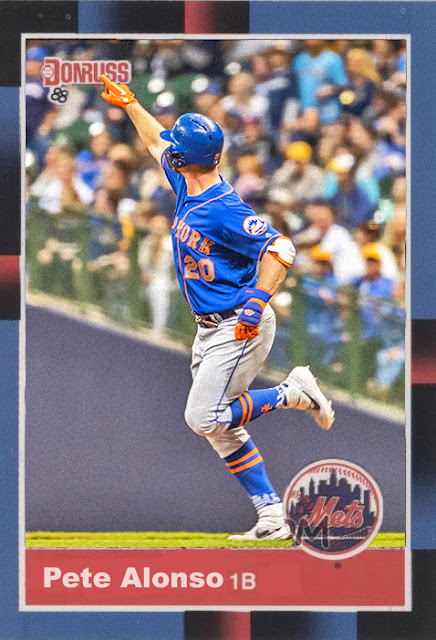 The Pete Alonso era is well underway in New York, and it couldn't have come at a better time: the team wasn't getting much better, and Jacob de From was tired of being the only draw.

I mean, looking at the rest of this team, there are a few good pieces, like your Confortos, your Jeff McNeils, your Dom Smiths, but...everybody else is just lumbering around the middle of the road. Edwin Diaz is blowing saves, Thor's injured again, Matz and Wheeler are mediocre, Frazier's hitting okay, Ramos is passable, and Cano is not the strong piece the Mets figured they'd be getting.

So why is it good that Pete Alonso's doing well? Because the Mets had been waiting for a piece to build a new team around.

Let's face it, the best players on this team are gonna be traded soon; Conforto will probably be gone within a year, and so will deGrom. The ones that stick around, at least the younger pieces, will be designed around Alonso. This guy is an anchor: he's hit 24 home runs already, he's got 57 RBIs, and he's batting .271. For a rookie, that's pretty great. He also looks like the type of person that could keep running with numbers like these for the rest of his career, and the Mets need a guy like that.

I just don't know how long the Mets are gonna have to wait for a truly great team to build around him. I mean, right now they're just waiting for the farm system to reset, and the pawning's gonna be beginning soon, but...by the time the Mets have that team ready, will Pete Alonso be as reliable as he is now? It remains to be seen.

For now, it's just nice seeing a hard-hitting Mets player leading the charts. I bet Yoenis Cespedes wishes that was him.

Coming Tomorrow- Okay, so they're back below .500, but that doesn't mean they're not still one of the more interesting middling teams out there. Here's the finally fully-formed third baseman.
Posted by Jordan at 8:02 PM